Steel Shredded AF Review – Should You Use This Supplement? 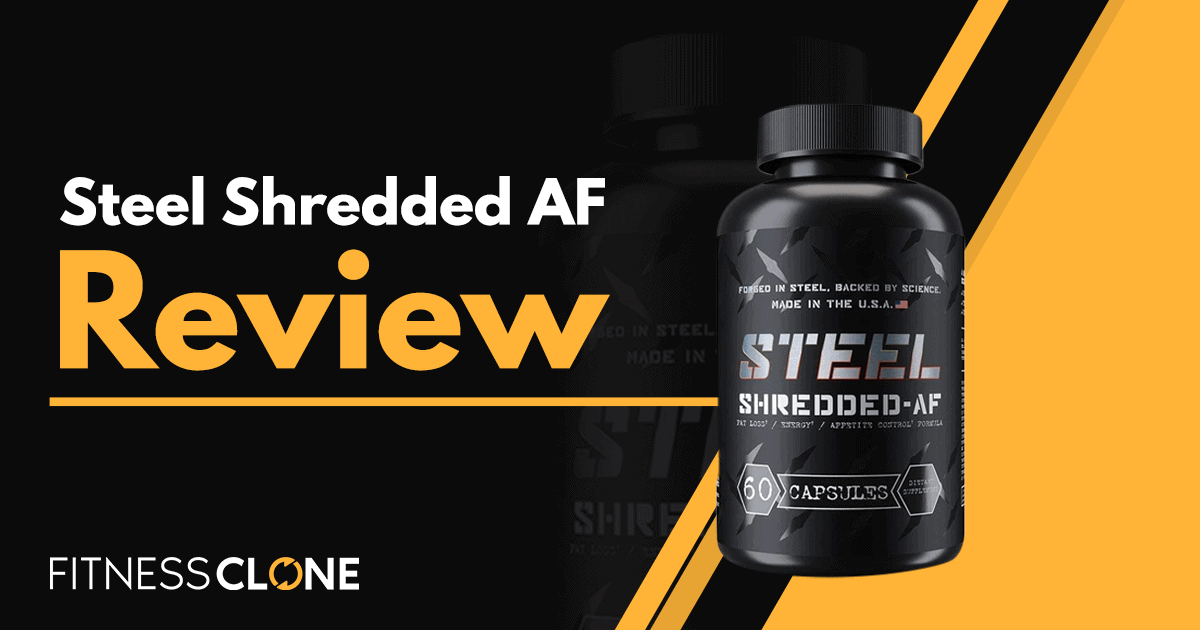 Founded in 2016 with the vision of providing the best, most high-quality, and effective fitness products in the industry, Steel has rapidly made their name in the highly competitive supplements market.

They claim to use only the highest quality ingredients to create science-backed formulas designed to help you “push past your physical limits to achieve optimum health,” and when we look at their entry into the fat-burner market, we have no reason to doubt this.

Granted, as with most fat-burners out there, the main ingredient is caffeine, which has us begging the question, “does it go any further than that and include other ingredients to accelerate fat burn, or is this yet another case of jitters, irritability, and insomnia in a jar?”

Let’s find out with this Steel Shredded AF review.

Steel claims Shredded AF will boost energy, metabolism, and focus while suppressing your appetite—or in other words, the usual claims made by nearly any fat-burner.

But does Steel come through?

So far as what we see from the product ingredients, dosage, and quality, there is no reason to doubt any of this:

Steel claims to be very careful with the quality, purity, and science behind their ingredients, which include:

All compound amounts included in Shredded AF are within what has been determined safe, though some may be sensitive to its ingredients even in these amounts.

As with any fat-burner, Shredded AF only works if you do. That means that while it does contain ingredients that will absolutely increase your metabolism, sense of wellbeing, and focus, it isn’t a magic pill that will allow the pounds to melt away while you sit on the couch eating cheesecake.

With that in mind, this is a product that compliments a good diet and exercise routine, in that it will help you light up additional fat calories.

Who Is Steel Shredded AF Best For?

Shredded AF is great for anyone looking to decrease their body fat through diet and hard work in the gym. But while it does contain ingredients scientifically proven to boost fat-burning and metabolism, it isn’t for those sensitive to caffeine and other stimulants, nor for those uncomfortable with using hormones from an outside source.

It is also a good product for anyone needing a boost in their focus and energy, such as late-night workers, students, or healthcare workers.

Finally, it should also be noted that at least 3 of the ingredients in Shredded AF–N-Phenethyl Dimethylamine, Isopropylnorsynephrine, and N-Methyl Tyramine–are currently banned from drug-tested competitions, making it a poor choice for many competitive athletes.

Shredded AF claims to increase energy, focus, and thermogenic fat mobilization while suppressing the appetite. Looking at its ingredients in their prescribed amounts, there is no reason to dispute this.

Again though, the use of this product needs to go along with careful adherence to diet and exercise for it to be fully effective.

As with any product that speeds you up, Shredded AF has some concerns when it comes to safety and side effects.

For instance, those sensitive to stimulants such as the caffeine anhydrous and theophylline included in the product may experience:

For this reason, those sensitive to stimulants should use extra care or avoid this product, and the product should NEVER be used in amounts that exceed the recommended dose. Alpha Yohimbe is also dangerous in high amounts, and extreme use can lead to death, and the product contains ingredients that are illegal in drug-tested competition, which may also speak to the ingredient safety.

Where To Buy Steel Shredded AF

At around $70 for a 30-day supply, Shredded AF isn’t cheap. For instance, at around $20 for a 60-day supply, Ronnie Coleman’s Light Weight Baby is an effective fat-burner that, unlike Shredded AF, features all-natural ingredients with few safety concerns, which won’t get you booted from drug-tested competitions.

That said, Shredded AF can be purchased from most online and brick-and-mortar retailers specializing in diet and fitness supplements. This includes Amazon, Steel’s website, and such retailers as The Vitamin Shoppe and Max Muscle.