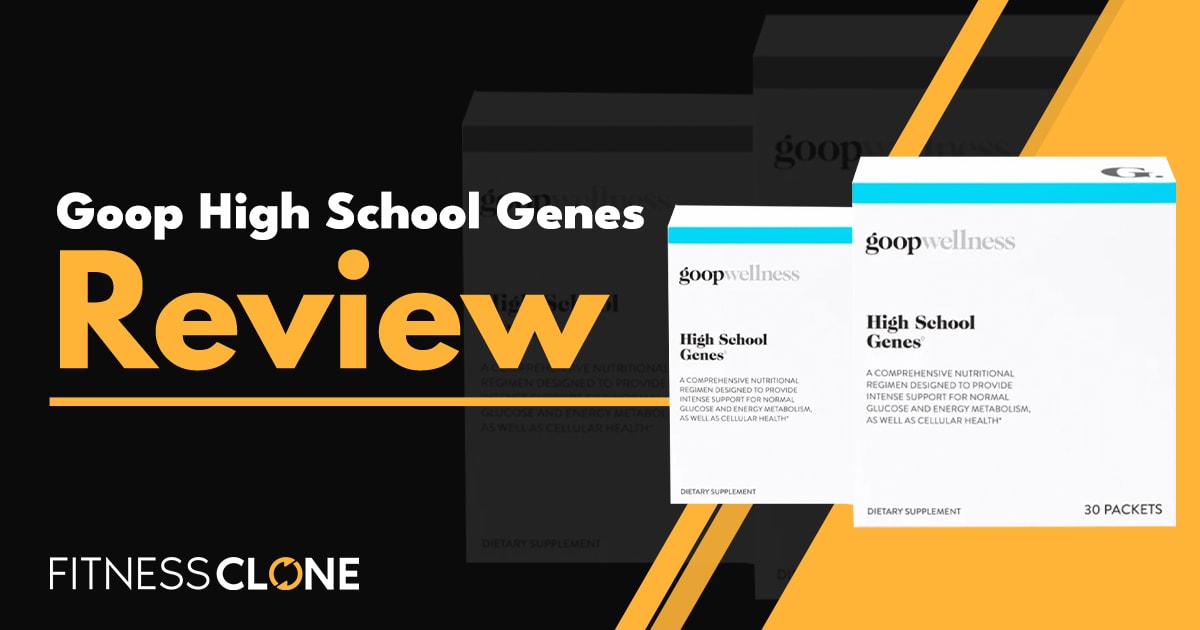 Who here wishes they could have their high school body back? You’re not alone. We may not have realized how good we had it at the time, but man do we wish for it once it’s gone.

Diet and exercise play a key role in getting your metabolism back to where it used to be, but that’s not always as easy as it sounds, especially as we age. Because of this, many women have started reaching for supplements to help, such as Goop Wellness High School Genes, a product aimed at boosting metabolism in peri and post-menopausal women, but does it have any merit? Let’s find out.

Gwyneth Paltrow launched the health and wellness company, Goop Wellness, in 2008. Their product line consists of health and wellness supplements such as Goop Gut Microbiome Superpowder, GOOPGLOW Multivitamin, High School Genes, and more, as well as beauty products, clothing, sex toys, and more. All products are claimed to be toxic-free.

Goop High School Genes is marketed as a “comprehensive nutritional regimen designed to provide intense support for normal glucose and energy metabolism as well as cellular health.” It includes cinnamon, green tea extract, B vitamins to support metabolism, alpha-lipoic acid as an antioxidant, and ginger and licorice for digestive support. It is marketed towards perimenopausal and postmenopausal women who aren’t having success with diet and exercise.

Goop High School Genes supplement regimen is designed to take you back to your younger years. With ingredients that provide benefits such as supporting metabolism, boosting energy levels, and improving digestion, you’ll forget your true age, or so they claim.

The supplements provided in this regimen include a Phyto blend multivitamin with over 20 vitamins and minerals to cover all your bases. They also include an omega 3 DHA-EPA supplement to support immune health, and antioxidants to prevent oxidative stress from life’s indulgences. Don’t forget a gut-balancing blend of herbs to keep you regular, and metabolism support with ingredients such as green tea extract, cinnamon, and alpha-lipoic acid.

Consuming food sources of omega-3s have been shown to help lower heart disease risk however, supplements don’t appear to have the same benefits. A newer study found a link between high amounts of omega-3 fatty acids in the blood for an increased risk of prostate cancer in men, but more research is needed on this.

Those who struggle with nutrient deficiencies due to a lack of diversity in their diet may find benefits in this supplement due to its high vitamin and mineral content. However, for its intended purpose of improving metabolism in peri-menopausal and post-menopausal women, this supplement regimen will likely fall flat. Although there is a lot of power in the placebo effect, there is no research to prove that this combination of ingredients will successfully improve metabolism and balance the gut in that population.

Who is Goop High School Genes Best For?

Goop High School Genes is marketed towards peri-menopausal or post-menopausal women looking for a metabolism boost. Although it would not hurt that population, this product would likely work best for those who have nutrient deficiencies as it has a high vitamin and mineral content in its regimen. Although it won’t likely provide the results as claimed, it could provide a great benefit to that population.

Although the trendy name and packaging are enticing, you are far more likely to get results by getting these nutrients from foods. These pills may seem like a quick, albeit expensive fix, but supplement companies have not yet been able to successfully replicate some of these ingredients, such as antioxidants and phytonutrients found in whole foods. To put it plainly, you are paying a high price for a product that may not be as effective as desired. Not to mention, many of the studies they have available for some of these nutrients contain small sample sizes or are lacking definitive results.

With supplement regimens such as this, one of the biggest concerns is overdoing it. Many consumers don’t realize that you can overdose on certain vitamins, specifically fat-soluble ones such as Vitamin A, D, E, and K, which are stored in the liver. Consuming high amounts of water-soluble vitamins will result in expensive urine as your body will flush out what it doesn’t need. Although no adverse side effects have been reported, none of these supplements have been approved by the Food and Drug Administration (FDA). If you are considering this regimen, it’s a good idea to speak to your healthcare provider first.

You can purchase High School Genes directly from the Goop Wellness website here.

A one-time purchase of Goop High School Genes is priced at $90 for a 30-day supply. You can also subscribe and save, which will bring the cost down to $75 per 30-day supply and can be canceled at any time. Each packet contains 6 supplements that are a mixture of tablets and soft gel pills.

Ekrin B37S Review – Is This Massage Gun Worth Buying?

Pump Serum Review – Should You Buy This Supplement?

PROBIO-50 Review – Is This Cutler Nutrition Probiotic Worth Buying?

PatchMD Multivitamin Patch Review – Does It Have The Vitamins You Need?