DripDrop Review – How Does This Electrolyte Drink Mix Stack Up? 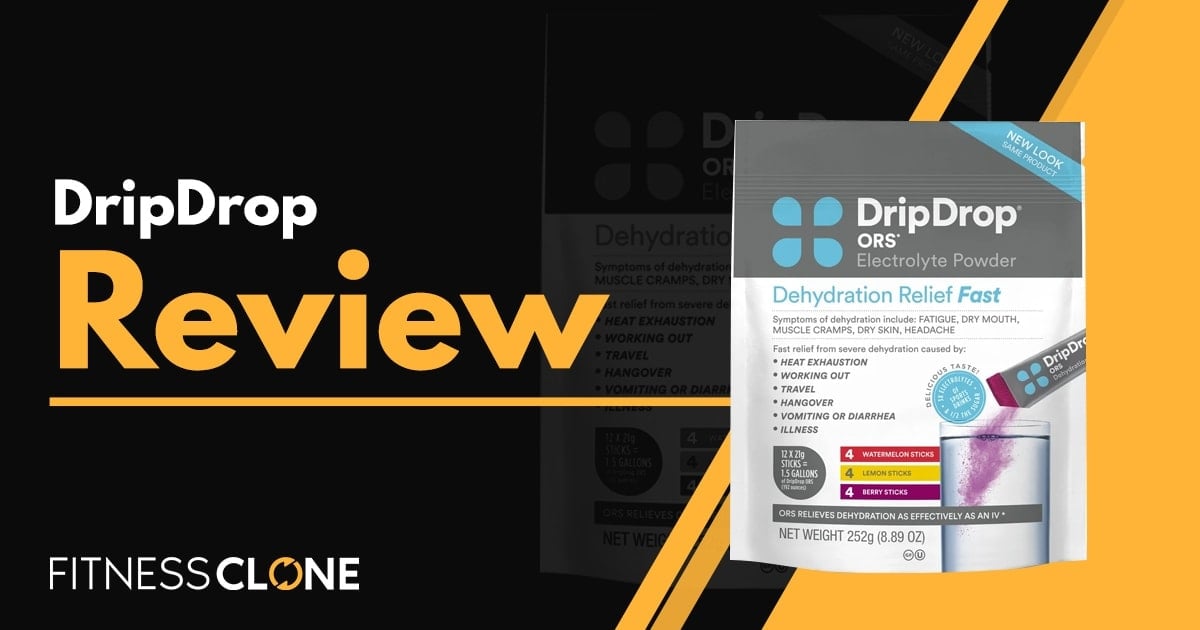 DripDrop is a powdered drink mix that is designed to supply critical electrolytes to anyone suffering from dehydration. The product was developed by Eduardo Dolhun, MD. Dr. Dolhun is a board-certified family practice physician out of California. The product was birthed out of disasters he witnessed while treating a cholera outbreak in the ’90s in Guatemala. More than 15 years after his experience, he formulated the product with the premise to improve hydration in severely ill children. Since the company’s conception in 2010, it has been taking off as a treatment option across the world for individuals in disaster situations. In 2014 DripDrop was awarded a bronze medal by Edison Awards. DripDrop is also fast becoming a go-to option for endurance athletes. Unlike other sports drinks, DripDrop is low in sugar but provides a heavy dose of electrolytes lost in sweat. So, what do you need to know about DripDrop and how does it compare to other electrolyte drinks?

DripDrop has a singular focus. It is designed to help rehydrate anyone suffering from dehydration. It does this by providing electrolytes like sodium and potassium, while also supplying magnesium and zinc. The unique balance of these minerals and glucose allows DripDrop to effectively rehydrate and restore the body back to its natural fluid balance.

Sodium is the principal electrolyte in the body. It is responsible for maintaining proper fluid balance, propagating signals across neurons, and initiating muscle contractions to name a few. Table salt is the most common form of sodium people encounter. When sodium is ingested through the diet, it gets absorbed in the gut and enters the plasma.

Sodium is incredibly important to maintaining proper fluid balance in blood plasma, muscles, and throughout the body in general. Our kidneys are designed to filter out waste and other metabolites to sustain life. To do this, the kidney relies on the flow of sodium up and down its concentration to control the flow of water and concentrate urine. In cases of extreme dehydration, such as diarrhea or intense endurance exercise, sodium can be lost. When this happens, no amount of water will be able to rehydrate the body. In fact, drinking pure water in these cases can exacerbate the issue.

Potassium is an electrolyte that plays many roles in the body. Similar to sodium, potassium is involved in fluid balance, nerve function, and muscle activity. When people think of great sources of potassium, they often think of bananas. Potassium citrate is a common form of potassium used in supplements. It is not the most bioavailable form, but it is also not the worst either.

Since potassium plays a similar role to sodium, when potassium levels drop the kidney has a difficult time maintaining fluid balance. This is often why people experience muscle cramps following long bouts of strenuous exercise.

Approximately 2/3 of American’s have a magnesium deficiency. Magnesium is involved in over 300 different metabolic processes. When too much magnesium leaves the body a variety of symptoms arise. The most common reported issued associated with magnesium deficiency are muscle cramps and spasms. It is imperative to maintain healthy magnesium levels. With all supplements, the right form is critical. While magnesium citrate is absorbed better than magnesium oxide, the citrate form has a tendency to pull water out of the body and into the intestines. Since DripDrop will be taken orally with water this effect is not a big concern. However, it is still worth noting. Magnesium chelates, those bound to amino acids, may have been a better choice for the products intended users.

Zinc is a trace mineral important for a variety of processes like protein synthesis, cell growth, and immune function. It also facilitates the transport of water and other electrolytes across the intestinal barrier. Essentially zinc will help to make the rest of DripDrop work more effectively. In the case of severe dehydration due to diarrhea, zinc can also help to protect the intestinal wall from infection.

Unlike sports drinks on the market, DripDrop contains a small amount of sugar. The added sugar is to enhance electrolyte absorption. Sodium is absorbed in the gut via a sodium-glucose transport system. When this system is operating efficiently, it will also increase the absorption of water, magnesium, and potassium from the gut. Without sugar, DripDrop’s osmolarity would be off and would not be as beneficial.

This product was initially designed to address childhood death due to infection-induced dehydration. Their website tends to focus on individuals that are sick, elite endurance athletes, firemen/police, and those with a hangover. At the end of the day, DripDrop’s simple, the targeted formulation will help anyone suffering from dehydration.

It may need to be stated that DripDrop is not a performance-enhancing supplement. This is not to say that it won’t help with performance. Dehydration and low electrolytes can dramatically impact the body’s work capacity. By supplementing with DripDrop and addressing dehydration and electrolyte imbalances, the user will be able to work at the maximum capacity for a longer duration than otherwise possible.

DripDrop marketing does not appear to make bold claims like many other supplements. The company’s focus appears to be on providing the best tool for rehydration. The product is made up of a balanced formula supported by research to enhance hydration. While some ingredients could be of better quality, these issues are negligible and probably aren’t a cause for concern.

Who is DripDrop Best For?

Many supplements make the mistake of claiming to help everyone. DripDrop has focused its product on helping anyone with hydration concerns. As the company grows it seems they may be finding more markets to move into. This is evident when you look at its evolution. The product was initially intended for children in disaster areas that were succumbing to the fatal effects of dehydration. Now the company markets towards endurance athletes, law enforcement, and even people suffering from hangovers. The common thread here is each of these groups are at risk for dehydration.

The ingredients used in DripDrop are very safe. The only cause for concern may be consuming too many of these packets at one time. It may result in hypernatremia, too much sodium in the blood, or hyperkalemia, too much potassium in the blood. However, this is unlikely.

Zinc: Role in the management of diarrhea and cholera

WHO | Zinc supplementation in the management of diarrhoea

Where to Buy + Costs

DripDrop can be found at a number of different retailers like Walgreens, Amazon, and directly on dripdrop.com Price ranges between $3.99 and $28.99 depending on the quantity.

truMedic Massage Gun Review – Is It Worth The Purchase?

1st Phorm Ignition Review – Is This Post-Workout Worth Buying?

Hydrant’s Rapid Hydration Mix Review – Is It Worth The Cost?

Instaflex Advanced Review – Can This Supplement Give You Joint Pain Relief?

Progenex Recovery Review – Should You Take This After A Workout?

Living Fuel SuperGreens Review – Is It The Meal Replacement You Need?

obé Fitness Review – Is This Fitness App Worth Downloading?

Naturelo Whole Food Multivitamin For Women Review – Is It Effective?