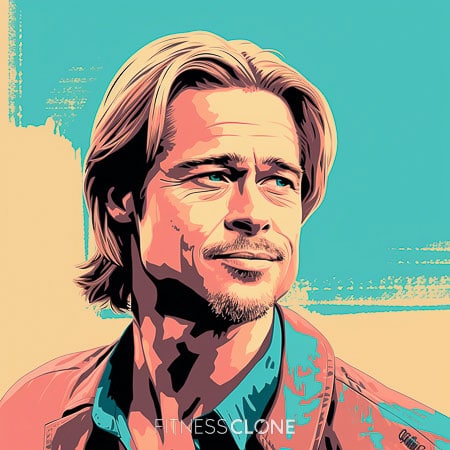 Brad Pitt got his big break in film in the movie Thelma & Louise.He has been nominated for and won multiple awards including a Screen Actors Guild Award, a Gold Globe and three Academy Awards. He owns a production company called Plan B Entertainment. Pitt has been nominated twice for Sexiest Man Alive by People magazine. But Pitt isn’t just a pretty face; he is also an activist in humanitarian causes such as the ONE campaign that combats AIDS and poverty in the developing world. The Maddox Jolie-Pitt Foundation is a charitable organization that contributes to humanitarian causes all over the world. Pitt has admitted to having a problem with alcohol and worked hard to clean himself up. He has 6 children. Pitt is 5 feet 11 inches tall and weighs about 170 lbs. He has gotten his body fat down below 5% for certain roles.

The Willpower of a Greek God
Pitt said preparing for his role in Troy was the toughest thing he’d ever done, and that includes getting ripped for Fight Club.

High Protein, Low Carb
There were actually 2 phases to Pitt’s Troy diet. In the first phase, he bulked up, so he did eat carbs, particularly by carb backloading. But in phase 2, he ate primarily protein and very low carbs and fat.

Lean & Mean
Apparently, Pitt also only ate 4 meals a day, despite a punishing schedule of 3 hours of exercise every day except Sunday. He gave up smoking, drinking, and all junk food.

Pitt drank 20 oz. of water first thing in the morning as part of his training for Troy.

For his Troy diet, Pitt would have eggs, whey protein shakes, almonds and bananas at breakfast, a salad with raw seeds at lunch and dinner would be grilled lean meat, vegetables and brown rice.

Pitt would also drink his veggies in an 80% vegetable, 20% green apple juice blend.

Having given up cigarettes, beer and potato chips, Pitt admitted to allowing himself the occasional McFlurry shake.

Pitt on His Substance Abuse Problems

‘I can’t remember a day since I got out of college where I wasn’t boozing or…something.’

Pitt on His Current Non-alcoholic Drink of Choice (cranberry juice and sparkling water):

‘I’ve got the cleanest urinary tract in all of L.A., I guarantee you!’

Pitt says getting in shape for his role of Achilles in Troy was the hardest thing he’d ever done. He trained for 8 months in advance of filming.

During the first part of his training for Troy, Pitt worked for several months to put on as much muscle mass as he could.

In phase 2, Pitt focused on burning body fat to look, well, like a Greek god. He worked out every day except Sunday.

Pitt did an hour of cardio on Monday, Wednesday and Friday.

Tuesdays, Thursdays, and Saturdays, he would do an hour of yoga and stretching.

Pitt did weight training 6 days a week, with a concentration on different areas each day.

Want to get ripped fast? Do sword fight training instead of traditional exercise. Pitt did an hour or 2 of sword practice, alternating with martial arts each day of the week except Sunday

After 10 min on treadmill, check that your heart rate is 75% of maximum. (To calculate target heart rate use this formula: 207- (your age x 0.7). This will give you your maximum HR. Multiply that number by the percentage, in this case 0.75.) Pitt’s trainer suggests wearing a heart monitor to be sure you’re working at the appropriate levels.
After 20 min. on treadmill, do the ab intervals.

Weightlifting: Abs & Shoulders
Do 3 sets x 15 reps of each exercise: until you feel like you’ve ‘killed it.’ 60 seconds rest between sets.

Martial Arts: Hold a 10lb. dumbbell for all these

Pitt on His Physique

‘I’m one of those people you hate because of genetics. It’s the truth.’

‘[…]Obsessing over being perfect stops you from growing.’

‘You make yourself what you are. You have control of your destiny.’

Pitt used whey protein shakes to help him bulk up while staying lean.

A multivitamin is always a good idea to fill in any nutritional gaps in your diet.

Another way Pitt added bulk and strength was with creatine monohydrate.

Pitt got his big break in Thelma & Louise when Billy Baldwin dropped out to film Backdraft.

Not only did Pitt make breakfast for his kids every day, run a film production company and get involved with many humanitarian causes, he somehow found the time to design a line of furniture.

Pitt and co-star Eric Bana did not use stunt doubles for their battle scene in Troy. Instead they made a pact to pay for clobbering each other, $50 for a slight infraction and $100 for a major hit. Pitt’s fees to Bana: $750.

No Google For You

Pitt and Jolie blocked their names on their computers and other devices so their 6 kids couldn’t look them up on the internet.

‘I will take wisdom over youth any day.’

‘My theory is, be the shark. You’ve just got to keep moving. You can’t stop.’

‘In Missouri, where I come from, we don’t talk about what we do — we just do it. If we talk about it, it’s seen as bragging.’

‘Success is a beast. And it actually puts the emphasis on the wrong thing. You get away with more instead of looking within.’