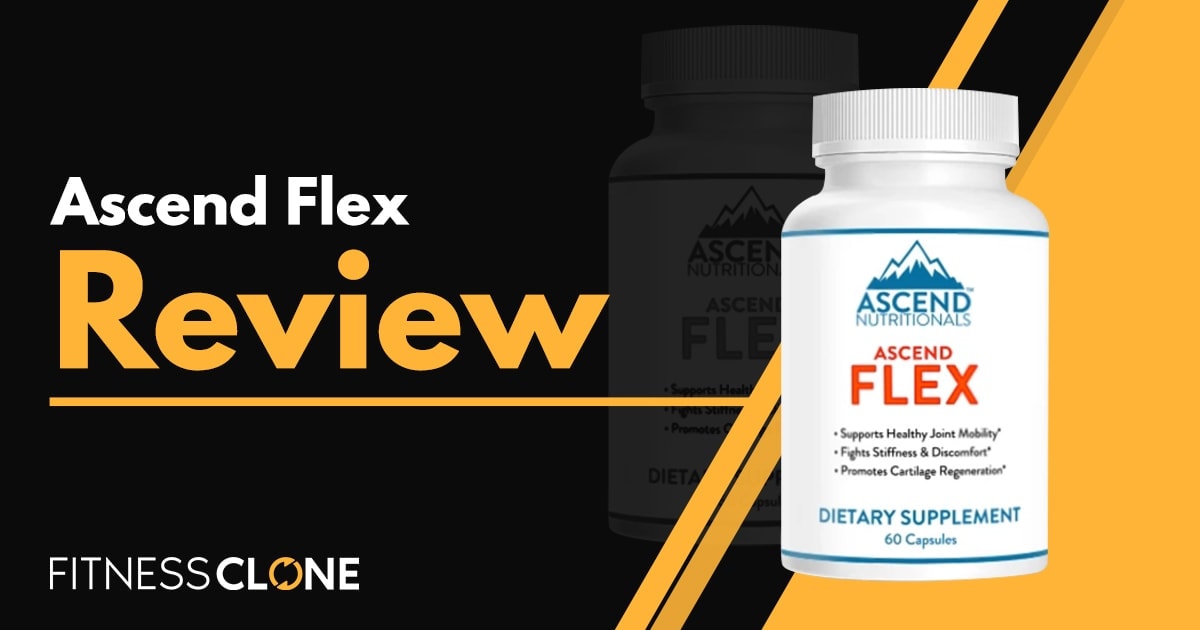 Arthritic joint pain affects millions of Americans every year. According to the CDC, nearly 1 in 5 women and men experience arthritic pain and 1 in 4 of those individuals experience severe debilitating joint pain. Arthritis is commonly seen in older patients, but it does present in children with rare conditions too.

Given the severity of arthritis pain, this is a big claim. Lots of products out there claim to be miracle pain treatments but don’t actually do what they say. Today, we are going to take a look at Ascend Flex joint pain supplements and talk a bit about their pros, cons, ingredients, and whether or not you should bother with the purchase.

Quick note: These supplements are specifically made for people suffering from joint pain from mechanical arthritis, e.g. arthritis caused by the physical wear of joints. It is not made for those who have arthritic symptoms arising from some underlying condition such as autoimmune conditions.

Ascend Flex is an oral supplement designed to reduce and prevent joint pain due to arthritis. Ascend Flex bases a lot of its claims on the power of turmeric, a spice from the turmeric plant that is commonly used in food in cultures across Asia. Each bottle comes with 60 capsules and they are to be taken 2 capsules twice per day (so 4 total each day). From their own website, Ascend Flex claims to “support healthy joint mobility”, “fight stiffness and discomfort”, and “promote cartilage regeneration.” That last part is pretty important considering that arthritic pain is caused by reduced cartilage volume in joints.

Even though it makes these claims, the manufacturers are clear to point out these claims have not been evaluated by the FDA (as it is with pretty much any supplement out there). So, these claims should be taken with a grain of salt. This means that Ascend Flex should not be seen as a treatment for arthritis, but just a way to manage pain. Other important ingredients in Ascend flex include ginger extract, glucosamine sulfate, and chondroitin sulfate, though turmeric makes up the bulk of the mass of ingredients.

Ascend Flex is made by Ascend Nutritionals. Unfortunately, not much information on the company seems to be available online. We were able to find that Ascend Nutritionals has many of their products shipped by The Fulfillment Lab, Inc, a distribution company located in Tampa, FL that performs fulfillment and shipping services for many skincare and supplement products.

Unfortunately, this shipping facility has seen many complaints on the Better business bureau concerning its billing practices, unauthorized charges, and unresponsive customer service. While this may not be directly related to Ascend Nutritionals and the efficacy of their products, it can be seen as a red flag over the legitimacy and professionalism of the business.

Ascend Flex contains around 12 different ingredients, but the bulk of it is made from turmeric powder. So we will cover the effects of turmeric as it is the most important active ingredient.

Turmeric is a spice that comes from the turmeric plant. Turmeric is most well known as the spice that gives Indian curry its distinctive flavor. The active chemical in turmeric that explains its properties is curcumin which is often used as a natural food coloring agent.

The main use of turmeric in medicine is to reduce inflammation. Curcumin in turmeric is believed to have anti-inflammatory properties and some research shows it is as effective as ibuprofen at reducing joint pain from arthritic inflammation. There is also some evidence that high doses of turmeric can help regulate kidney function and reduce itching. Some experts claim that turmeric can also help with asthma, skin disorders, and cognitive problems, but there is very little clinical evidence for these claims.

According to studies, 600 mg of turmeric three times a day can help reduce pain from joint inflammation. If you follow Ascend Flex’s directions, then you will get 1.6 grams a day, just the right amount.

The other main ingredients glucosamine sulfate, chondroitin, MSM, and Boswellia, are hailed as helping restore and rejuvenate damaged cartilage. There is a handful of well-supported studies that show glucosamine sulfate and chondroitin are effective at reducing joint pain with a daily dose of 1,200 mg and 1,500 mg respectively.

How Does Ascend Flex Work?

The ma9in mechanism is the anti-inflammatory effects of turmeric and the cartilage restorative properties of the other main ingredients. There is pretty good evidence indicating that these ingredients on their own can help with pain and reduce inflammation, though there do not seem to be any studies focusing explicitly on Ascend Flex.

Ascend Flex can be bought from the company Ascend Nutritionals website (although the site is currently down as of the time of writing). It does not seem to be available on Amazon or other third-party Amazon retailers. One bottle costs $69, three bottles cost $177, and six bottles cost $294.

Ascend Flex Joint Pain Supplement: Worth it or Not?

While each of the presumed ingredients in Ascend Flex have verified uses, the lack of information on the manufacturer and the many complaints related to its shipping center make use hesitant to recommend this product. Also, Ascend Flex is pretty expensive compared to a lot of other turmerics containing supplements out there.

Bottom line: if you are thinking of trying turmeric, then it would probably be better to start with a cheaper option.

Overall Rating: 2 out of 5
Categorized in: Joint Supplement Reviews, Reviews