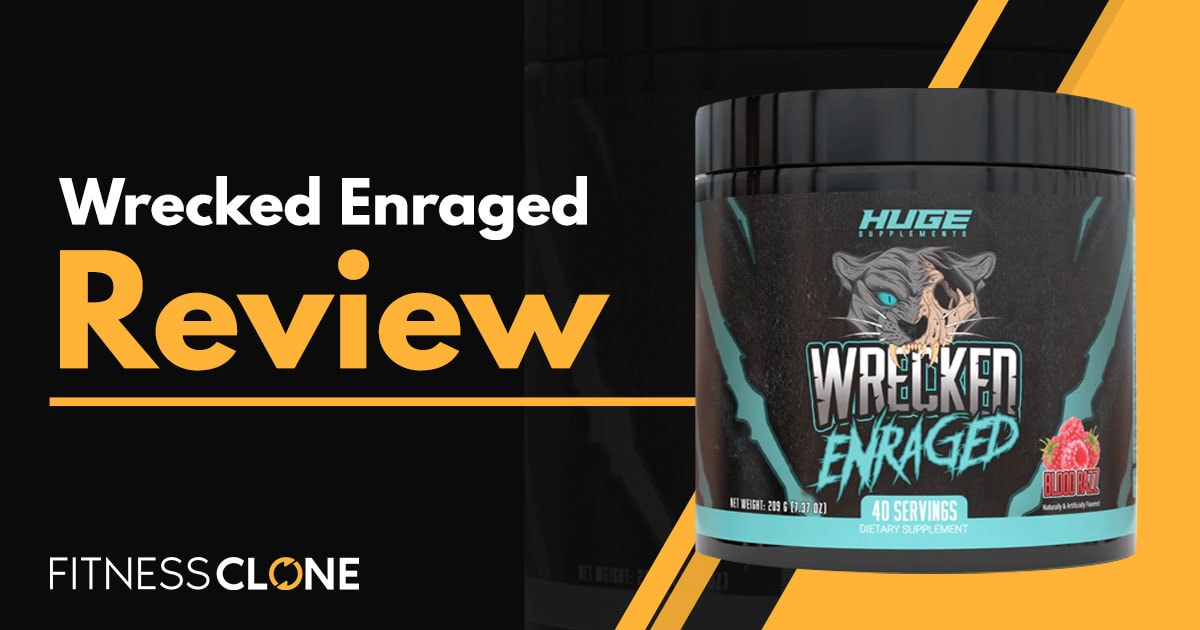 When it comes to pre-workouts, there are people who fall into three general categories, typically:

Well, if you’re number three, you’ll want to pay attention to this Wrecked Enraged review. I’m going to go over the main features of this supplement. And you’ll learn about the key ingredients, doses, and what you can expect from this.

Ultimately, by the end of this Wrecked Enraged review, you’ll be able to see if this supplement is really worth adding to your routine.

Wrecked Enraged is a pretty new and potent high-stim pre-workout from Huge Supplements, the same makers as other many well-known supplements such as Pump Serum, Exterminate, Rebirth PCT, Sapogenix, Ecdysterone, and Wrecked Pre-Workout.

Wrecked Enraged contains 10 total ingredients, including three forms of caffeine, beta-alanine, and some unique ingredients such as halostachine. All of these are designed to work together to give bodybuilders, weightlifters, and other athletes a huge boost to take workouts to the next level.

With its high concentration of different ingredients, Wrecked Enraged claims to give you these benefits:

Without enough energy, you won’t be able to push through your entire workout and really crush all of those necessary sets and reps.

Wrecked Enraged claims to give you extreme, long-lasting energy with their blend of several stimulants. This includes three sources of caffeine and other stimulants such as isopropylnorsynephrine. These may give you a surge in physical energy and mental power, allowing you to dominate your workouts.

It can be hard to stay focused throughout your whole workout, especially if it’s long-lasting or high-intensity. But you need that concentration to get the most out of your session.

And Wrecked Enraged promises to give you intense focus that lasts the whole session. Huperzine A, Alpha-GPC, and other nootropics are meant to get you dialed in, and laser-focused on every set, for maximum performance.

Have you ever started out a workout feeling on top of the world, only to get unexpectedly worn down later on? Weights that you thought you could do for 8 reps, suddenly you can only get for 5. And that, unfortunately, is workout fatigue.

But Wrecked Enraged claims to extend your workout capacity by supercharging the muscles and nervous system. They have many ingredients to fight off fatigue and help you blast through tough sets, such as beta-alanine, caffeine malate, and halostachine.

Wrecked Enraged is definitely a legit product because it contains some well-researched ingredients, is tested for quality, and is made by a reputable company.

But that doesn’t necessarily mean that it will work effectively. So, if you want to know if Wrecked Enraged actually provides benefits, keep reading below!

Here are the 10 Wrecked Enraged ingredients:

Beta-alanine is an amino acid that can increase muscle carnosine concentrations. This is important because it helps sustain muscular performance during exercise. Plus, beta-alanine can reduce lactate build-up, which affects fatigue.

Beta-alanine seems especially helpful for increasing workout capacity, meaning you can go harder without getting tired as quickly.

Another product with a solid dose of beta-alanine in it is Ryse Project Blackout.

Alpha-GPC is a well-absorbed form of choline. This can increase acetylcholine, which has an influence on focus and cognition. Not to mention it can improve muscular contractions.

But there is only limited evidence showing that Alpha-GPC can improve weightlifting, and some studies don’t show benefits. This is one of those ingredients that has more anecdotal support, with many gym bros saying it helps with focus and concentration, and even power.

N, N-Phenethylamine is a chemical compound somewhat similar to the effects of phenylethylamine. It may increase dopamine, serotonin, and adrenaline, thus providing an increase in alertness, energy, and mood.

But there haven’t been any studies done on it.

Generally, caffeine is a potent stimulant that increases dopamine, adrenaline, and serotonin, resulting in increased energy and alertness. It also can ramp up nervous system activity and improve endurance, strength, and exercise capacity.

Caffeine anhydrous is supposed to be the main player, while di-caffeine malate may have unique effects by helping the caffeine to last longer.

Caffeine is well-known for boosting workout performance and energy, but you can also build up a tolerance to it.

Halostachine is a chemical compound that seems to have stimulatory effects like N,N-Phenethylamine. It acts on the sympathetic nervous system and increases adrenaline and dopamine to possibly improve mood, energy, and alertness.

But again, there isn’t any research on this for exercise performance.

Huperzine A is a compound that comes from Huperzia serrata extract. It increases acetylcholine levels and has been shown to improve cognitive function in the elderly and people with brain degeneration. And that’s why it is included in many brain supplements, such as NooCube.

With that said, Huperzine A may not be very beneficial for improving cognitive performance during exercise in healthy people. But many gym-goers have claimed that it works.

N-Isopropylnorsynephrine is the third “sciencey” sounding ingredient in here. This chemical compound behaves a lot like the other two mentioned in that it increases sympathetic nervous system activity.

This stimulant activates adrenaline and other brain chemicals and hormones that may improve alertness, energy, and mood.

There just needs to be more research done on it in humans.

I briefly am going to cover how the doses for a few main ingredients compare to what the research says is actually effective. This helps to see how much of a benefit you may get.

Listed below are the comparisons for total caffeine, beta-alanine, and Alpha-GPC:

You can take one to two scoops, so the dosage range below reflects that for Wrecked.

Wrecked Enraged should likely work as a high-stimulant pre-workout.

This supplement has a high dose of caffeine along with beta-alanine, which are two very well-researched ingredients. It also is well-dosed in Alpha-GPC, which has decent evidence behind it too.

And while some of the other stimulants aren’t as evidence-based, they still have been shown to work as stimulants, which may likely carry over to workout performance. I just can’t claim that for sure.

It is likely that Wrecked Enraged will give you a pretty big energy boost and should also improve your alertness, while reducing fatigue. This is due to the sheer number and high doses of stimulants they have in here. I’m talking a minimum of 200mg of caffeine and over 200mg of the other stimulants combined! (And double that if you take two scoops).

The improvements in focus may not be as good, though. Huperzine A and Alpha-GPC aren’t always shown to improve focus or workout performance, although they certainly can for some people.

Who is Wrecked Enraged Best For?

Wrecked Enraged is certainly not for everyone. It’s best for hardcore, recreational lifters who want a massive increase in energy and overall stimulation.

Athletes and anyone in competitive sports should steer clear of Wrecked Enraged because it contains banned substances.

How to Take Wrecked Enraged

Huge Supplements Wrecked Enraged comes in a powder form. You are supposed to take 1 to 2 scoops with 8 to 12oz of water, preferably around 30 minutes before your workout.

If you’re new to pre-workouts or want to assess your tolerance, they recommend starting with just one-half to one scoop first.

Also, I really don’t recommend taking this supplement after about 4 pm or so, especially if you don’t metabolize caffeine very quickly. But everyone is different, so you can see how you do with it.

There certainly are a number of safety concerns worth noting with this high-stim pre-workout. With the high amount of caffeine and other stimulants, you may experience several side effects, such as:

I recommend never going beyond two scoops, even if you seem to tolerate it well. Huge Supplements states the same word of caution.

You should always contact your doctor before using a supplement. In this case, especially if you have heart problems, high blood pressure, or even an anxiety disorder or other psychological condition.

And again, Wrecked Enraged contains a few banned stimulants: N,N-Phenethyl dimethylamine, halostachine, and N-Isopropylnorsynephrine. Not every organization bans these, but you’ll need to check your organization’s rules and guidelines.

Lastly, Huge Supplements Wrecked Enraged is made in the USA in an FDA-registered, GMP-certified facility.

Wrecked Enraged is a high-stim product. And there are other supplements like that, but that have different formulas overall. That’s why I wanted to list off a couple of these, which are Ryse Project Blackout and Redcon1 Total War.

Ryse Project Blackout is a multi-faceted workout formula designed for improved strength, pumps, focus, and endurance. It contains a whopping 370mg of caffeine and other strong doses of beta-alanine, betaine, and theobromine, among a few other ingredients.

This is definitely a high-stim pre-workout, but without some of the less-researched ingredients that are in Wrecked Enraged.

Total War by Redcon1 is a loaded pre-workout designed to increase power, focus, energy, and performance. This formula contains 250mg of caffeine and high doses of beta-alanine, agmatine, citrulline, and other ingredients.

Overall, the ingredients in this formula are more well-researched than in Wrecked Enraged.

Where to Buy Wrecked Enraged

You can buy Wrecked Enraged on the Huge Supplements website at this link.

There are 40 servings (40 scoops) per container, which costs $44.95 ($1.12/serving). This is honestly a really modest price considering the high doses of stimulants in here.

Although, if you need two scoops, that jacks up the price per serving of course. Even still, a little over two bucks per serving isn’t out of the question for many people.

That wraps up this Wrecked Enraged review.

Wrecked Enraged is easily one of the highest-dosed, stimulant-loaded pre-workouts out there. This can be great if you are a hardcore recreational lifter who wants a surge in energy and alertness.

But it’s not a great choice for stim-sensitive people, athletes, or people in competitive sports.

Overall, it depends on your goals and other factors. But if you’re just a normal gym-goer who loves the feeling of high energy and intensity (and isn’t competing), Wrecked Enraged is worth taking a look at.

Ion Pre-Workout Review – A Look At This Supplement By Performix

1UP WHEY Protein Review – Should You Use This Whey Powder?

Clear Muscle Next Gen Review – A Supplement For Muscle Recovery

MindBodyGreen Beauty & Gut Collagen+ Review – Is This Supplement Right For You?