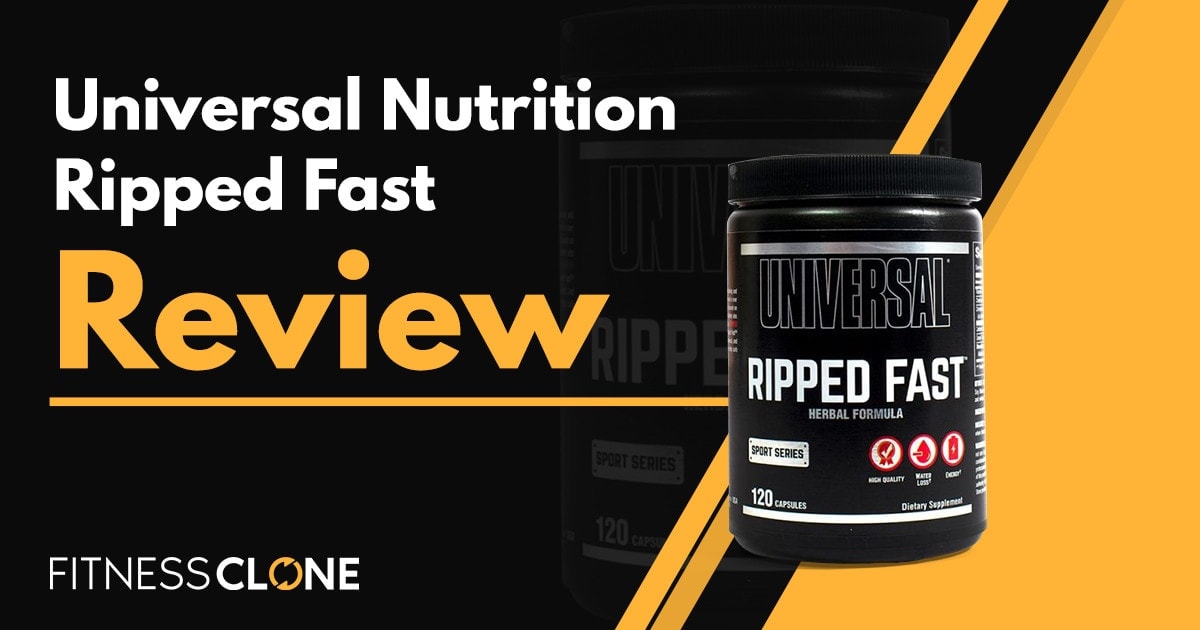 Founded waaay back during the late-70’s golden age of bodybuilding, Universal Nutrition is now proud of the place they’ve earned in the weightlifting community. That was back around when a cocky young Austrian starred in a flick called “Pumping Iron,” though long before he married a Kennedy and became governor of California.

But getting back to Universal Nutrition, they believe in 3-things: That the pursuit of strength isn’t so much exercise as it is a way of life; that a community is stronger than an individual; and that in order to talk the talk, you must first walk the walk (they put it in a more round-about way than that, but you get the idea).

And they put this philosophy into all their supplements, including their fat burner, Ripped Fast.

So, how does Universal’s fat-burning supplement measure up? Let’s take a closer look at everything this powder has to offer in this Universal Nutrition Ripped Fast review!

Ripped Fast combines vitamins, minerals, energizing plant compounds, and a sharp dose of caffeine all into one formula meant to help you work out like a jackrabbit and burn fat. It’s not only meant to energize you so that hitting the gym is more something you need to do than merely want to, but to keep you burning fat for long after your sweat session. 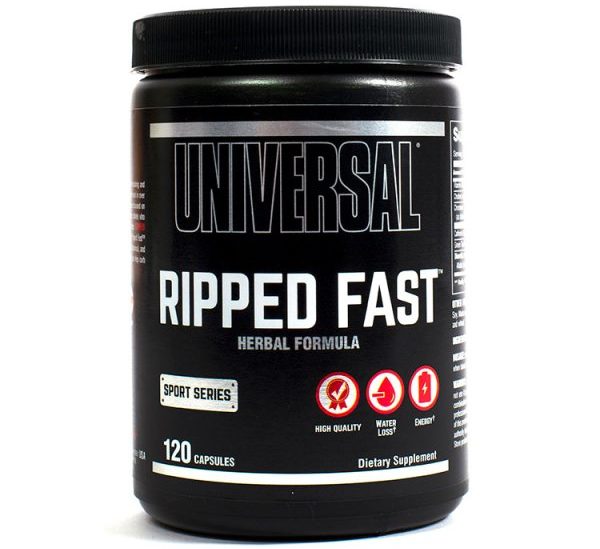 It also contains compounds relatively unique in the world of fat burners, in that compounds such as lecithin, which itself is a fat, is included. This not only benefits you by helping reduce bad cholesterol in favor of good, but by increasing your body’s level of choline, which is necessary for fat transport and metabolism.

And it has other stuff in it too that we’ll get to in a bit.

If you’re going to get cut, it’s best that you’re safe in doing so. This includes using herbal diuretics that allow you to get enough daily hydration without risking kidney damage and other dangerous problems.

Plus, there’s the metabolic side of things, which is where herbs such as cayenne pepper come in handy—not to mention the zip of the caffeine in cha de bugre, green tea, and of course, in the caffeine in the product. 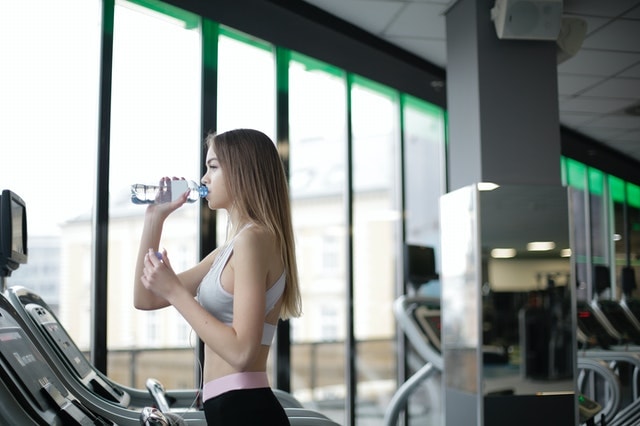 Gets Rid of Extra Water Weight

Feeling bloated? Whiz it away! With diuretic herbs such as dandelion, alfalfa, uva ursi, and caffeine (we know, caffeine’s not an herb—though it can come from herbs, and for the purpose, it does make you have to whiz like a weasel!), you’ll never be carrying around too much water weight, or want to be too far from the loo either.

Along with making you pee a lot, caffeine can also make you less hungry and more energetic. The formula also contains lipotropic ingredients that help you burn more fat to further reduce your appetite and boost energy.

This includes compounds such as choline, cayenne, and lecithin that boost thermogenesis while tossing fat on the fire to light up your workouts and keep you lean. 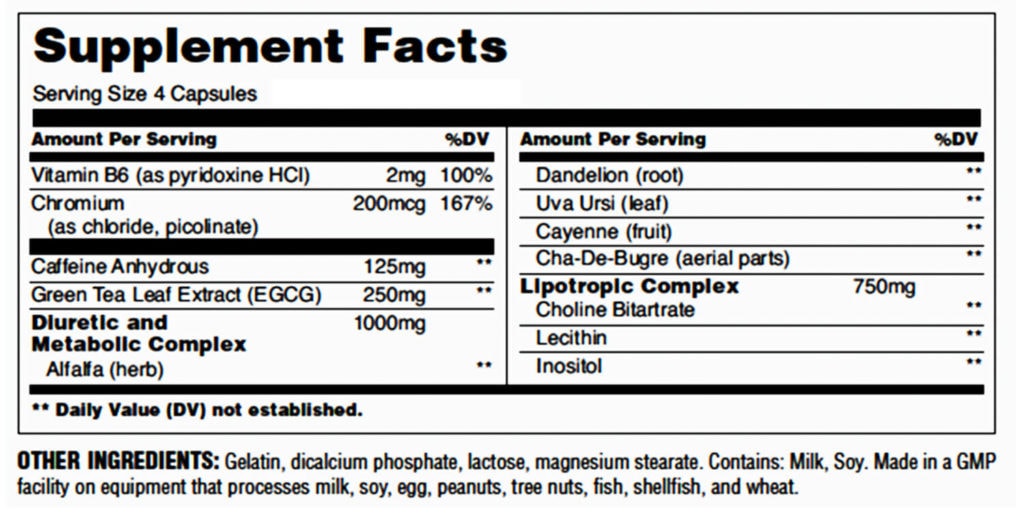 Both the water-soluble vitamin B6 & the mineral chromium help you metabolize fat and carbs. For instance, vitamin B6 helps in the production of hemoglobin, which is a protein in your blood that’s responsible for delivering energizing oxygen to your cells. This increases your overall metabolism, which of course, results in your need for more fuel to run on, which comes in the form of body fat and blood sugar.

Chromium is also a mineral that’s necessary for the metabolism of carbohydrates and fats, and deficiencies, though rare, have been associated with adult diabetes and cardiovascular disease.

Not only does Ripped Fast include 125 mg of caffeine anhydrous, but there’s also some in the green tea extract, and cha de bugre is a rich source of the zippy stuff. This, of course, means we don’t really know just how much caffeine is in this formula, though it does tell us that if you’re interested in sleeping, keeping a consistent train of thought, and not finding your colleagues to be as annoying as gnats, you likely need to cut back on your other sources of caffeine throughout the day.

That said, there’s a reason caffeine is present in nearly every fat burner and cutting formula on the market, which is that it both mobilizes stored fat to be burned as fuel, as well as gives you the energy to burn more calories. If you are sensitive to caffeine, though, there are a few caffeine-free fat burners out there, such as Burn Lab Pro and Slimvance.

Speaking of compounds that every other fat burner contains, Universal also adds their obligatory dose of green tea extract to the mix. This adds a tad more caffeine along with potent antioxidants and L-theanine, which is an amino acid that helps counter the effects of caffeine to keep you cool, calm, and collected.

It also contains antioxidants called “catechins” that mobilize fat from cells and boost your metabolism with energizing hormones such as norepinephrine. This helps boost your metabolic rate to burn more fat since not only is it now there and available, but you have more energy to burn it with.

Now that you’re well-caffeinated and have fat mobilized for the burning, it’s time to get rid of some water weight. To do this, you’re going to do some whizzing, and lots of it. Yes, you’ll sweat too, especially while you’re in the gym, but mostly you’ll be peeing away the pounds thanks to the diuretic mix. Caffeine also makes you pee a lot, so don’t stray too far from the nearest restroom or stand of trees after using this product.

There’s also the metabolic side of things, which herbs like cha de bugre and cayenne do their part in. For instance, cha de bugre adds yet more appetite-reducing caffeine to your jitters, and cayenne has capsaicin, which not only curbs your appetite and revs up your metabolism but makes a plate of tacos taste even better.

Free the fats! They’ve spent far too much time in their cellular confines, and it’s not time to release them to fuel the fires of your athletic pursuits. With the help of a few compounds, including the essential nutrient choline, the fatty compound lecithin, & a type of sugar that works with insulin to control your blood’s sugar and triglycerides called inositol.

In unison, these three fat-freeing musketeers help release what you got so that the other compounds in Ripped Fast can help you go to work burning it.

As with the many similar energizing fat burners on the market, Ripped Fast works if you do. That means no magic pills to pop that allow you to circumvent careful eating, exercise, and rest.

Instead, if you pop these pills along with your good eating, exercise, and recovery habits, you’re likely to see better results than without them. They do, after all, have properties that reduce your appetite, release fat from cells, and of course, pep you up to hit the gym, so chances are they can help you eliminate a percentage or two of frustrating fat.

Who is Universal Nutrition Ripped Fast Best For?

Anyone who isn’t sensitive to caffeine and is willing to eat right, exercise, and get enough rest if the caffeine allows them to can benefit from this formula. It’s all-natural and herbal and contains no stimulants other than all the caffeine in it, which is good, since it’s loaded with caffeine.

And with that in mind, it’s probably best that those under 18 avoid this product, as should pregnant or nursing women. Anyone on medication should also check with their doctor before using, and lots of caffeine isn’t good for high blood pressure either, so if that’s what you have, lay off this product. 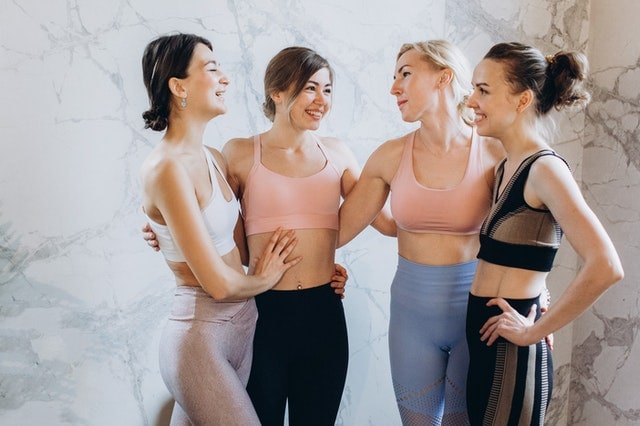 Universal claims Ripped Fast energizes you, burns fat, and reduces water weight, and there’s no reason not to believe them. The ingredients in the product are all scientifically proven to do these things in various capacities, so unless you expect miracle pills that you pop to instantly look like the chiseled examples on Universal’s website, you’re in luck.

Plus, since so many other fat burners on the market use similar ingredients, something’s got to be working for someone!

Just in case you didn’t know it, caffeine has side effects that include jitteriness, irritability, increased blood pressure, and those nervous, smelly pits that have you standing as far away from your office mates as possible during conversations.

Some may also have rare allergies or sensitivities to some of Ripped Fast’s other ingredients, in which case they can simply take advantage of Universal’s generous 30-day, 100% money-back guarantee.

At $15.91 for about a month’s worth, Ripped Fast won’t break the bank. Granted, caffeine is cheap, though it’s hardly the only ingredient in this formula. Even so, it’s an honest price that we can appreciate in a world of marketers that pitch premium pricing as meaning a product somehow works better! 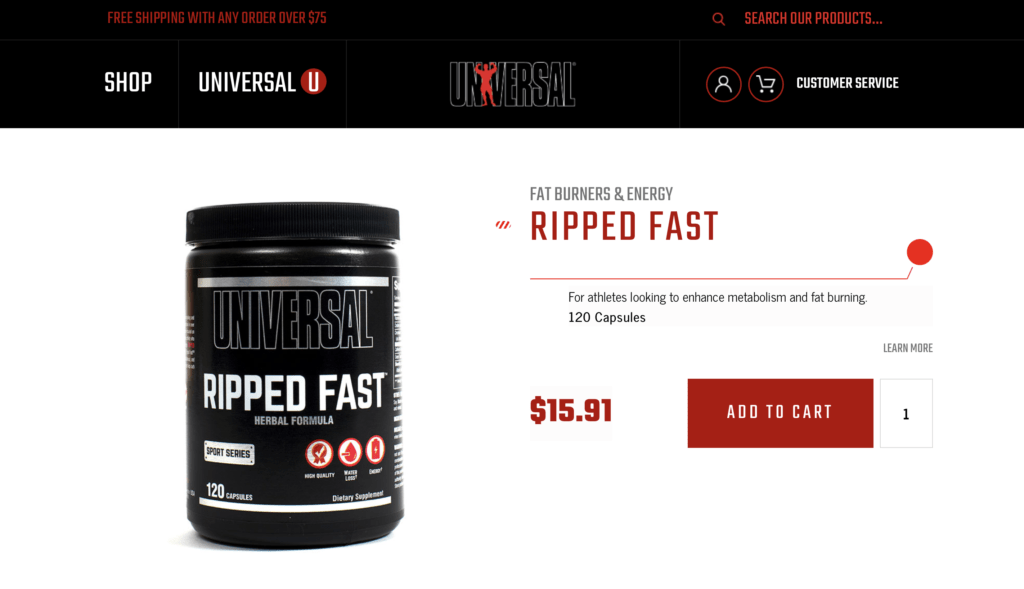 Along with Universal’s site, you can purchase Ripped Fast through Amazon, Target, iHerb, and many other retailers both online and off, corporate and mom & pop, that sell quality workout supplements.