Verso Cell Being Review – Should You Buy This Anti-Aging Supplement? 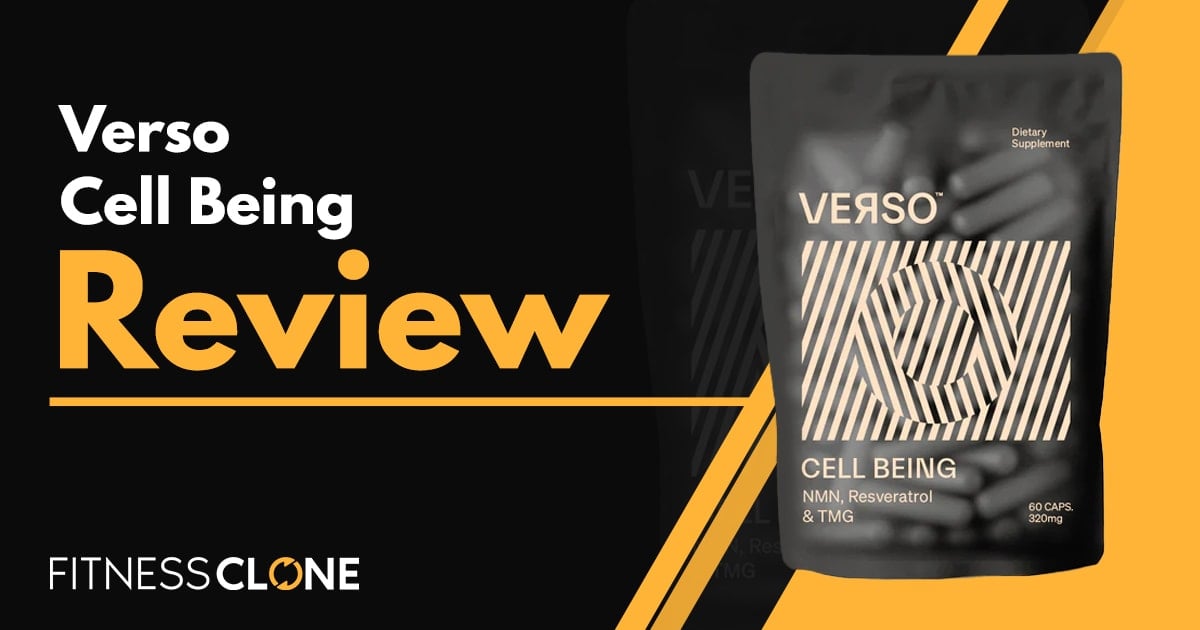 This article is a review of an anti-aging and wellness product called Verso Cell Being.

Within the health and wellness supplement industry, a hot trend right now is anti-aging. And there are many supplements out there that claim to slow down the aging process and lead to a number of health benefits.

But as a holistic health practitioner and researcher, it’s my job to make sure that these products are actually effective, beneficial, and, of course, safe to consume.

So, in this article, we’re going to take a look at a product called Verso Cell Being. Continue reading this Verso Cell Being review to learn what it’s all about, its possible benefits, and whether you should consider buying it.

About Verso Cell Being

Cell Being is designed as a NAD-boosting supplement to help with DNA repair and restore balance in all of the body’s systems.

It is made by Verso, an American company that manufactures all of its products in cGMP-certified, FDA-compliant facilities. In addition to Verso Cell Being, they have also produced Verso Clean Being.

Verso Cell Being is featured by a blend of NMN, resveratrol, and trimethylglycine (TMG), which they say are three critical nutrients that promote anti-aging and boost health at the cellular level and beyond.

Plus, Verso Cell Being is third-party tested and kept in custom-built refrigerators to ensure long-term stability and potency.

By optimizing health at the cellular level, Verso Cell Being is advertised to deliver a wide range of benefits, including:

It can be harder and harder to manage your weight as you get older, due to less time for physical activity, more stress, and so on.

But Verso Cell Being claims to support weight management using NMN and other ingredients which they say help increase energy metabolism.

Plus, they claim that resveratrol can help mimic the effects of fasting on the body.

We are what we’re made up of, and so the health of our cells equates to our overall health.

Yet, as we age, cells can get damaged and start functioning incorrectly, which may lead to disease and dysfunction.

However, Cell Being claims to aid in cellular and DNA repair, in part by regulating autophagy (a “cleaning out” process involving the controlled death and destruction of old or damaged cells). Plus, they claim that Cell Being will improve mitochondrial function (which is important for energy).

As one ages, brain inflammation and other concerns become more likely to happen. And this can affect memory and cognitive function, as well as mood.

But Verso Cell Being is advertised to improve memory and cognitive function by restoring health and reducing inflammation in the brain and nervous system with NMN.

Heart disease is unfortunately very common. And the risk gets heightened as you age, in part due to the effects of poor diet and lifestyle choices, as well as general inflammation.

Verso Cell Being claims to support heart health due to a few key compounds, such as resveratrol.

Inflammation is often regarded as the cause of many diseases, at least in part. But many people today struggle with low-level chronic inflammation from stress, diet, toxins, and more.

But Cell Being claims to help reduce inflammation by controlling it all the way down to the cellular level with ingredients such as NMN and resveratrol.

A lot of factors in modern life can also make it hard to reach optimal immune function, such as stress, poor sleep, and toxins.

Fortunately, Cell Being is advertised to increase the function of the immune system and ward off viruses primarily due to resveratrol.

Many people struggle to get a good night’s sleep, and this can often increase as you age.

However, while it may not be a dedicated sleep supplement like Performance Lab Sleep or Som Sleep, Verso Cell Being does claim to help improve sleep quality and reduce drowsiness. This improvement in sleep may have further benefits for mental and physical health.

This surely seems like a massive list of important health benefits. But before you go out buying Cell Being, we have to make sure that it actually works!

So, keep reading to find out if Verso Cell Being is actually effective!

NMN is definitely one of the main advertised ingredients in Verso Cell Being. NMN is a naturally occurring molecule found in all life forms.

One of the key functions of NMN is that it’s a precursor to NAD. And NAD is critical for energy metabolism, numerous cellular functions, DNA repair, protein function, and much more.

NAD is also important to activate sirtuin genes, which play a role in aging. And it also helps maintain mitochondrial health in the cell (the mitochondria are necessary for carrying out energy for cell functions).

However, NAD levels decline as we age, so basically, NMN as a supplement is designed to restore NAD levels and, in turn, increase health.

And there is quite a bit of research showing the benefits of NMN.

Specifically, it may have benefits for metabolism, weight loss, brain health, endurance, cognitive function, insulin sensitivity, and more. Granted, more human studies are needed, including those related to safety and side effects.

Recommended dosage: 250 to 1,200mg (although this isn’t entirely definitive yet)

Resveratrol (included as trans-resveratrol in Cell Being) is a natural phenolic compound found in grapes, blueberries, and red wine, among other foods.

It is known for its potent antioxidant and anti-inflammatory activities. And there is evidence that resveratrol also has benefits for blood pressure, obesity, cholesterol and triglycerides, and even brain health/function.

It is often featured in other NMN supplements too, such as the Lovita line.

TMG is a compound with many key roles. For example, it plays a key role in methylation, which is a process that influences gene expression and ultimately can control DNA health. And this influences many bodily systems.

Plus, increasing NAD levels (which NMN does) can drain the body of methyl groups, so TMG helps to restore methyl groups to their normal level.

In plain terms, TMG basically works in tandem with NMN, and together, they work to increase various processes that may have anti-aging effects.

Does Verso Cell Being Work?

It seems likely that Verso Cell Being will work as a NAD-boosting, anti-aging supplement.

Of course, individual results may vary. And it may depend on things such as health status, genetic factors, and other things.

But, overall, Verso Cell Being contains well-researched ingredients proven to boost NAD levels, decrease inflammation and oxidative stress, and benefit health and function all the way down to the cellular level.

Plus, the dosages for both NMN and resveratrol are in line with research. But TMG is dosed pretty low, so this is one downfall.

If you take a look back at the claims made by Verso, there’s a lot to look through.

While I’d like to say that Verso Cell Being is guaranteed to lead to all of these benefits, the reality isn’t that simple.

Make no mistake, the ingredients in Verso Cell Being, particularly NMN and resveratrol, have been proven to offer a number of benefits for heart health, brain/cognitive health, exercise, weight loss and metabolism, inflammation, and many areas.

But it’s impossible to say that it will for sure work for you, especially since there isn’t a lot of human research.

With that being said, Cell Being may support all of those areas mentioned. And it may ultimately boost NAD production and influence many different body systems that have been damaged by aging.

Within the spectrum of anti-aging and cellular health supplements, Verso Cell Being seems to be one of the more well-researched and potentially effective ones.

Who is Verso Cell Being Best For?

Verso Cell Being is best for people who are interested in trying to boost NAD levels, control inflammation, and reverse any of the symptoms related to aging. It is a pretty wide-spectrum supplement that may be of interest to many different people.

How to Use Verso Cell Being

Verso recommends that you take one serving (two capsules) of Cell Being per day, ideally with healthy fats in your first meal of the day. This is to increase the bioavailability of resveratrol.

Also, you should store it in a cool, dark place to prevent any possible degradation.

Is Verso Cell Being Safe?

Overall, Verso Cell Being is generally safe to consume, although more research is needed on NMN.

Some possible side effects of Verso Cell Being are upset stomach, indigestion, flushing, nausea, and diarrhea.

Also, resveratrol may increase the risk of liver dysfunction in people with liver disease. And betaine may increase total cholesterol counts.

Verso Cell Being is made in the USA in a GMP-compliant and FDA-registered facility. It is third-party tested for quality and potency. And it is also gluten-free, vegan, and stored in custom-built refrigerators to ensure long-term stability and potency.

Where to Buy Verso Cell Being

You can buy Verso Cell Being on the Verso website at this product link.

Each pack comes with 30 servings (60 capsules). And you can buy one, six, or a whopping 12 packs at a time. Here are the prices:

Overall, this is a somewhat expensive product compared to some other NMN supplements, such as Toniiq NMN. But it’s still relatively affordable. And if you end up liking it, I definitely recommend going with one of their bulk options to save money.

That’s the end of this Verso Cell Being review.

And it looks like a solid supplement as a whole.

If you’re feeling the signs of aging, it can be frustrating, and maybe even a little scary. But Verso Cell Being may be something to consider if you’re looking to try to reverse some of the symptoms of aging and get a little health boost.

Not only does it include NMN, which is a really promising molecule for anti-aging, but it also has a great dose of the antioxidant and health-booster known as resveratrol, plus betaine for additional support.

And that’s why I recommend it as an option for anyone looking for an anti-aging supplement that actually has some evidence behind it.

Fenfast 375 Review – How Does This Intechra Health Supplement Stack Up?

Giddy Health Prostate Health Review – Is It Worth Using?

Obvi. Collagenic Burn Review – Should You Use This Two-In-One Supplement?

ASYSTEM Superhuman Supplements Review – Is It Worth It?