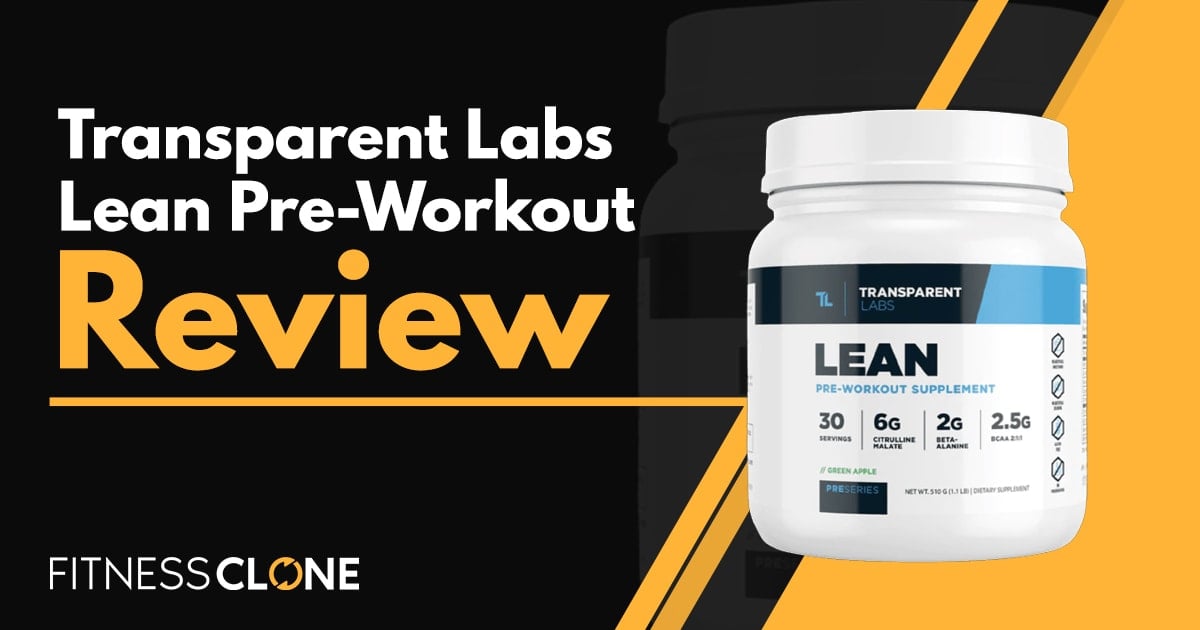 If you want to lose weight or improve your body composition, a solid workout regimen is obviously essential. And within this, many people try out different supplements, especially pre-workouts, to try and jumpstart the fat-loss process.

Yet, the degree to which these pre-workout supplements actually work depends on their overall quality and effectiveness. That’s why we’re going to take a closer look at one specific pre-workout designed for fat loss called Transparent Labs Lean.

Does it have the right ingredients? Does it provide the benefits you want? In this Transparent Labs Lean Pre-Workout review, we’ll discuss everything you need to know about this supplement to learn whether or not it’s worth the purchase.

It contains over 14 grams of evidence-based ingredients, such as beta-alanine, citrulline, and caffeine, to jumpstart and power through your workouts while stimulating the fat loss process. Plus, it contains various micronutrients designed to support the thyroid, which plays a role in metabolic rate and fat loss.

So, the main benefits of Transparent Labs Lean Pre-Workout are:

Transparent Labs Lean is advertised to be particularly beneficial for people looking to lose fat while maintaining muscle mass due to its combination of ingredients that are supposed to increase energy and performance, all while stimulating the metabolism and promoting fat loss.

A wide array of ingredients in Transparent Lean are also designed to improve both aerobic and anaerobic performance, such as strength, power, endurance, as well as recovery. It includes key players such as beta-alanine, betaine, caffeine, and citrulline, as well as BCAAs.

One unique potential benefit from Transparent Labs Lean is its claimed ability to increase thyroid function, which increases metabolism and, thus, may help with fat loss. To do this, they included various minerals, such as zinc, copper, and selenium.

Finally, Transparent Labs Lean is advertised to enhance mental energy and various aspects of cognitive function, such as focus and alertness. It also is designed to improve mood and motivation. Key ingredients related to these benefits are l-theanine, caffeine, theobromine, and carnitine.

But is Transparent Labs Lean a top-notch pre-workout for fat loss and performance? Continue reading to find out!

There are many well-known ingredients in Transparent Labs Lean Pre-Workout, along with some unique ones. Below is what’s in each serving (one scoop).

The first ingredient to take a look at is citrulline malate, which is a specific form of citrulline. It increases arginine and nitric oxide, which leads to more blood flow to the muscles. In turn, citrulline can not only improve exercise performance and give you the coveted “pump” feeling, but it can also lead to better nutrient delivery post-exercise and, thus, better recovery.

Also, the malate component is thought to aid in energy production. Overall, research shows improvements (albeit modest) in strength, muscular endurance, and power, as well as improved recovery and decreased muscle damage in some cases. The most effective doses are around 6 to 8 grams.

Furthermore, certain compounds stemming from BCAAs can be used as energy substrates during exercise, which can be beneficial for limiting muscle breakdown and possibly improving performance.

Yet, current research shows that BCAAs are overall not very effective for improving strength, power, endurance, or other aspects of performance. However, research does show that they are effective for reducing muscle damage and improving recovery in between workouts.

Another amino acid included in Transparent Labs Lean is beta-alanine. Beta-alanine is able to increase carnosine content in the muscles, which is important since carnosine helps to increase energy production and reduce fatigue by acting as an acid buffer.

Research shows that beta-alanine supplementation is able to reduce fatigue and improve exercise performance, especially for high-intensity activities involving power, speed, and strength. Anywhere from 1 to 6 grams has been effective, but typically at least 3 grams is best.

Yet another “beta” in Transparent Labs Lean is BetaPure. BetaPure is a patented form of betaine anhydrous. One of the main functions of betaine is that of an osmolyte, and it can help pull water into the cells creating an increased state of hydration. In turn, this can support the muscle cells during intense exercise. Additionally, betaine helps to improve energy production and may even enhance creatine production.

Plus, betaine has a number of ways it can help with body composition, such as by reducing homocysteine levels and increasing lipolysis and fat metabolism. Furthermore, research shows betaine can increase growth hormone and IGF-1, which can improve protein synthesis and muscle mass.

With all of this considered, there still isn’t a great amount of evidence in human studies showing the benefits. As of now, betaine is pretty effective for improving body composition, while it may only have mild benefits for exercise performance. The typical dose is around 2 to 3 grams.

Up next is a form of carnitine known as acetyl L-carnitine HCl. Carnitine can enhance brain function by increasing energy production in the brain as well as increasing acetylcholine levels.

Plus, on the physical side, carnitine supplementation may increase levels of this compound in the muscle, which not only may improve muscular performance, but also may aid in fatty acid oxidation.

Also, some research shows that carnitine supplementation can slightly improve exercise performance and improve recovery, although more research is needed.

Now, let’s look at choline bitartrate, a specific form of choline. Choline is a precursor of acetylcholine, which is a neurotransmitter involved in focus, memory, and other brain functions.

Plus, strenuous exercise can deplete choline levels, so supplementation can be beneficial for restoring adequate levels of choline. Overall, choline shows modest benefits for cognitive function and workout performance.

Up next is an amino acid known as l-theanine. Theanine increases serotonin, dopamine, and GABA in the brain, while also increasing alpha waves, all of which may lead to cognitive benefits, such as enhanced focus, attention, and alertness.

Plus, it can attenuate the overly-stimulating effects of caffeine and thus is useful for athletes who also take in caffeine. Typically, at least 200mg of theanine is needed.

Also included in Transparent Labs Lean is caffeine. Caffeine is notorious for being a central nervous system (CNS) stimulant, and it leads to increases in serotonin, dopamine, and norepinephrine, all of which can improve mood, alertness, and focus.

Caffeine is also able to enhance nervous system activation in the muscles and can delay fatigue, which is why it is often used by athletes.

Finally, caffeine may be able to stimulate thermogenesis, although its effects on weight loss are mild.

Another CNS stimulant is theobromine, although it has different and less intense effects compared to caffeine. The evidence so far shows that it may be beneficial for endurance exercise performance in particular.

Plus, one study found that theobromine may activate thermogenesis and can stimulate fat metabolism. So, it may be useful for weight loss too.

Transparent Labs Lean also included a number of trace minerals: iodine, zinc, selenium, chromium, and copper. Some research shows that these minerals can increase fat metabolism and are also involved in improved insulin sensitivity. Moreover, these minerals are essential in thyroid function, which plays a role in fat loss too.

The final ingredient in Transparent Labs Lean is BioPerine, which is a form of black pepper extract. BioPerine has been proven to enhance the bioavailability of numerous vitamins, minerals, and other ingredients, so it works well with every other ingredient here.

Overall, Transparent Labs Lean Pre-Workout should likely provide some benefits as a fat-burner and pre-workout. Most of the ingredients in it are very well-researched and proven to offer various benefits, such as greater strength, endurance, power, alertness, attention, and decreased fatigue. Plus, some of the ingredients can help promote thermogenesis and fat loss.

Yet, some of the ingredients are dosed a little bit lower than what is optimal, such as beta-alanine, betaine, and citrulline. But the doses overall are solid, and even the ones that are a little low are still close to or in the effective range.

Recall that Transparent Labs Lean is designed to:

These are all likely to occur to at least some extent, although some of the benefits will be modest at best.

Betaine, caffeine, and chromium picolinate may help you to lose body fat while retaining muscle mass, although I wouldn’t expect a huge decrease in fat mass.

Various ergogenic ingredients in Transparent Labs Lean Pre-Workout (e.g., beta-alanine, citrulline, betaine, caffeine) should also improve many aspects of aerobic and anaerobic performance, but again these will probably be mild to moderate. Plus, BCAAs could help to improve recovery.

Also, you may see improved thyroid hormone function due to the inclusion of trace minerals, but this is speculative since everybody has different hormonal profiles, to begin with. Supplementing with iodine, in particular, could even be counterproductive for some people.

Lastly, the caffeine and theanine combination should provide a nice boost in alertness, attention, focus, and overall cognitive performance. And this may be enhanced by theobromine, choline, and carnitine. As for the degree of improvement, I’d expect it to be mild.

So, overall, it is a solid supplement to give you a slight boost in performance and fat loss. And a slight boost may be all you need to get you where you want to go.

Who is Transparent Labs Lean Best For?

Transparent Labs Lean is best for athletes and other gym-goers who want to improve their performance and also improve their body composition. It could also be a good pre-workout in general for anyone looking to get a boost in the gym.

Transparent Labs Lean should generally be safe, although there are a few potential side effects and concerns. These include:

Also, some of the minerals may lead to excessive mineral build-up if you are already getting enough of them through your diet.

Transparent Labs Lean Pre-Workout is also free from artificial colors, sweeteners, and preservatives. It is also gluten-free and non-GMO. 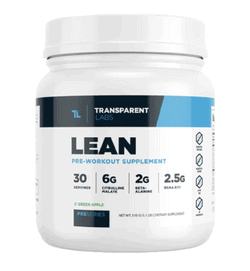 Also, there is a 60-day money-back guarantee, so you can return the product if you’re not satisfied. This is nice since Transparent Labs Lean really isn’t that cheap. It’s not overly expensive, but still at a pretty high price for pre-workouts.

Overall Rating: 3.9 out of 5
Categorized in: Pre-Workout Reviews, Reviews