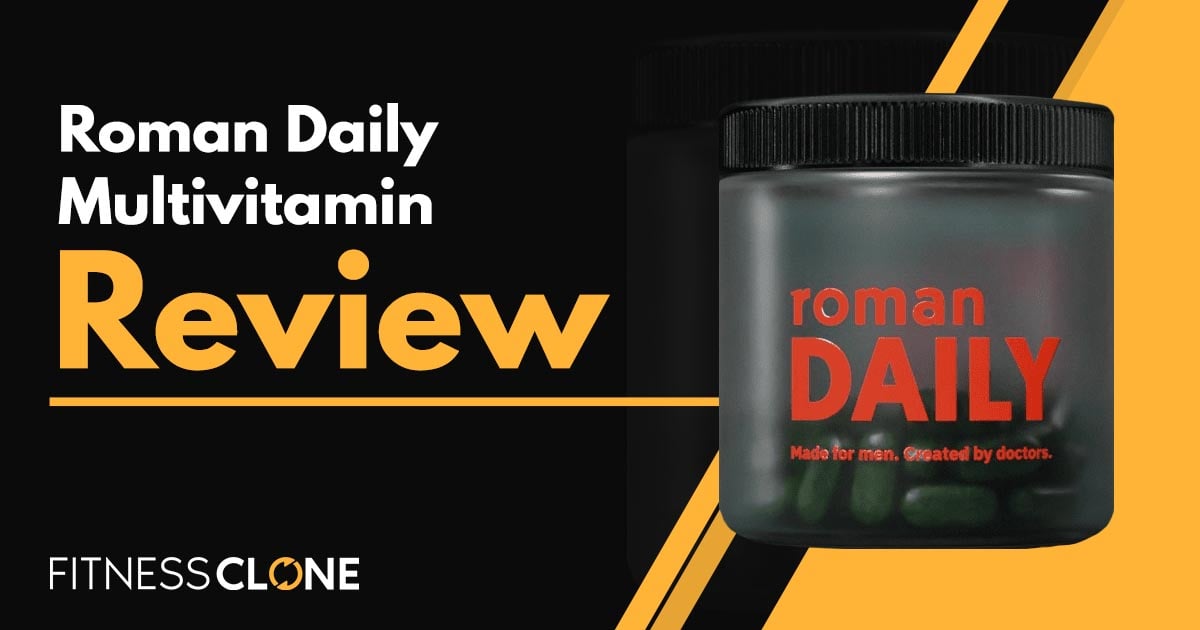 It seems that multivitamins are a dime a dozen these days.

But what’s far less common are multivitamins/minerals that are actually effective, dosed optimally, and suited to individual needs.

And one such product that claims to do all of that is called Roman Daily Multivitamin. After taking an initial glance at this multivitamin made for men, I was excited because it does seem to have a higher potential for effectiveness compared to other similar products.

So, continue reading this Roman Daily Multivitamin review to learn about this supplement’s ingredients, potential benefits, and whether or not it’s truly worth it for men.

Roman (Ro) is a health and wellness company that offers both prescriptions and over-the-counter supplements.

They are most known for their telehealth services, but as mentioned, they also offer a line of supplements for various health needs. And the Roman line, which includes Roman Daily Multivitamin as well as Roman Focus and Roman Testosterone Support, is a group of products made specifically for men.

All of the Roman supplements are doctor-formulated, research-backed, and made in cGMP-certified facilities.

What is Roman Daily Multivitamin?

The researchers and doctors at Roman dug into the research to find out which nutrients men are most likely deficient in. And thus, they created a formula that they say contains some of the top nutrients that correct deficiencies and improve health for men.

Roman states that just two tablets per day of Roman Daily are all you need to support your health as a man.

Plus, the tablets are coated with natural peppermint oil for a minty, fresh taste.

The 23 nutrients in Roman Daily are advertised to deliver a few key benefits, including:

As a man, you probably want to be active a lot, whether that’s with lifting, running, playing with the kids, or even at your job. But I know that activity can sometimes take a toll on the muscles and joints, especially as you get older.

However, Roman Daily claims to support key systems involve in physical activity. The nutrients in Roman Daily, such as calcium and magnesium, are advertised to support bone and muscle health and strength, so you can be at your best.

Equally as important as physical function is mental health and brain function. As you get older, you may face cognitive decline, changes in mood, or other frustrating symptoms.

But Roman Daily is advertised to support cognitive function and mental well-being with critical brain nutrients, such as the B-complex vitamins.

If you’re deficient in certain nutrients, your risk of immune problems increases. And this can be compounded by the stressors of life that men often face.

It’s well-known that heart disease affects men more than women. And as you get older, the risk of heart problems increases, especially if you have a poor diet and lifestyle.

And while Roman Daily Multivitamin can’t cure any problems, it is advertised to support cardiovascular health, especially with vitamin D and magnesium.

These definitely are some worthwhile benefits for men. But does Roman Daily actually offer these benefits? Read on to find out.

Roman Daily has 23 ingredients, most of which are vitamins and minerals. Although, they do have two “specialized” substances for men. Below is the full ingredient list.

Roman Daily includes 12 total vitamins, which are A, C, D, E, and the eight B-complex vitamins.

The vitamins are all dosed really well, usually at or above 100% of the daily value.

I also like that they use highly absorbable forms of the vitamins, such as methylcobalamin for vitamin B12, a combination of retinyl palmitate and beta-carotene for vitamin A, and niacinamide for vitamin B3.

One potential drawback is that there’s no vitamin K in here.

But overall, these vitamins in here should support a wide variety of healthy functions.

For example, vitamins A, C, and E are all antioxidants and may aid vision and immune health.

Vitamins A and E are also important for reproductive function and heart health too.

B-complex vitamins are important for energy, brain function, red blood cell function, heart health, and more. (and the high dose of vitamin B12 in here makes it seem that Roman Daily is particularly geared towards energy production and activity).

And vitamin D is critical for immune, bone, heart, and muscular health.

With the exception of magnesium and calcium, all of these minerals are dosed to a minimum of 100% of the RDA, so you can tell Roman wanted to have a high-dose mineral component as well.

The high dose of iodine may offer thyroid and metabolism support.

And the large doses of zinc and selenium are likely beneficial for immune health, anti-inflammatory effects, and hormonal function.

There’s also a large dose of copper in Roman Daily, which helps to balance out the zinc in it. And copper has its own benefits too, such as immune and nerve cell support.

Calcium is not only important for bone health but also for muscle and nervous system health too.

And magnesium is vital for muscle function and recovery, brain health, heart health, and more.

One unique mineral included is chromium, which may have benefits for metabolism and brain function.

Also, two lesser-known minerals in Roman Daily are molybdenum and manganese (no, not magnesium!).

Molybdenum is important for detoxification and metabolism. And manganese helps with heart health, metabolism, and hormonal support, among other things.

Overall, you can see that Roman Daily has a wide variety of minerals for multi-faceted effects.

Lastly, it’s important to discuss the formulation of these minerals. Most of the minerals in Roman Daily are chelated, which is great since these forms are absorbed better and used more efficiently.

Other Nutrients: Pygeum Bark and Lycopene

The last two nutrients in Roman Daily are Pygeum bark and lycopene.

Pygeum bark comes from an African tree. And certain compounds in it may help shrink the prostate, which could improve some prostate-related symptoms, such as frequent urination and nighttime bathroom trips. (This is also why it’s in some prostate-specific supplements, such as Prostate MD).

And lycopene is an important antioxidant with many possible benefits for men. For example, it may reduce the risk of benign prostatic hyperplasia (BPH), heart disease, and prostate cancer. Plus, lycopene may be able to improve fertility and hormonal health.

Roman Daily definitely looks like a solid supplement. And it’s likely that it will work as a men’s health supporter.

All of the nutrients and ingredients in Roman Daily Multivitamin are critical for men’s health. And I like how the dosages are high for most ingredients. Plus, nearly every vitamin and mineral is in a form with high bioavailability.

Yet, two nutrients that could’ve been put in Roman Daily are vitamin K and omega-3s. As these may have some benefits for overall health too.

And I also would like to see magnesium dosed higher.

But overall, it contains a solid blend of nutrients at effective dosages.

Overall, you can pretty much expect Roman Daily to do what it claims.

But keep in mind what the actual claims are: mainly, just support for different areas of health.

And Pygeum bark and lycopene may offer further benefits for prostate health, fertility, and other important male concerns.

Altogether, it really seems that the makers of Roman Daily Multivitamin took the time to create an individualized, specific product for men.

Who is Roman Daily Multivitamin Best For?

Roman Daily is best for men who want a specific multivitamin and mineral supplement geared for male health and performance.

It is best when used to supplement a healthy diet and lifestyle and to target any nutrient gaps that may exist.

All of the ingredients in Roman Daily are generally recognized as safe and shouldn’t have many (if any) side effects when taken at the correct doses.

But there are some possible side effects, such as upset stomach, headache, nausea, diarrhea, changes in urine color, and other minor symptoms.

Always consult your doctor before taking supplements, especially if you have underlying health conditions.

Roman Daily is doctor-formulated and made in a cGMP-certified facility in the US.

How to Take Roman Daily Multivitamin

It is recommended to take two tablets (one serving) of Roman Daily each day with food.

You can also take one tablet at a time, twice per day (again, with meals at each time).

Where to Buy Roman Daily Multivitamin

You can buy Roman Daily on the official Roman website at this link.

Each container of Roman Daily Multivitamin has 30 servings (60 tablets).

You can purchase either their Monthly Plan or Three-Month Plan. We will detail the prices for both below.

Overall, Roman Daily is very affordable, particularly considering how well-dosed it is for the most part.

Get $15 OFF Your First Order

That wraps up this Roman Daily Multivitamin review.

Multivitamins can be a tricky area to navigate, especially when it comes to finding the best one for you personally.

While a multivitamin can never truly be a one-size-fits-all product, there are definitely some that are better than others. And Roman Daily seems to be one of the better multivitamins for men. It contains key nutrients that support men’s health and wellness, and may even aid in the prevention of some diseases.

Plus, Roman Daily has high doses for nearly every one of its ingredients, so these may actually make a noticeable difference in your body.

Overall, if you’re a man looking for a multivitamin, Roman Daily Multivitamin is definitely worth looking into.

Performance Lab MCT Oil Review – Is It Worth The Purchase?

Nuun Review – How Effective Are These Hydration Tablets?

You Gut This Review – Is This Inner-ēco Supplement Effective?