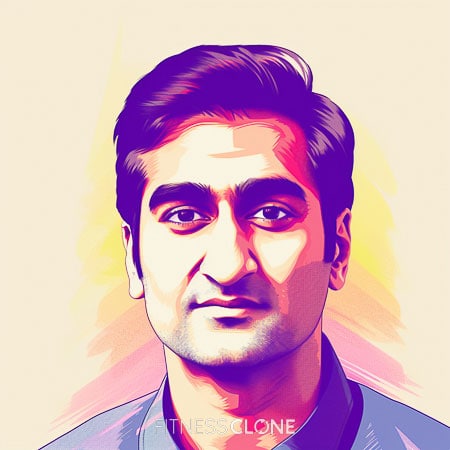 Kumail Nanjiani was born in Pakistan and moved to the US to attend college at age 18. He graduated from Grinnell in Iowa with a double major in philosophy and computer science. After college, Nanjiani co-hosted a video-game themed podcast and found small acting roles in comedy shows like Portlandia. In 2014, he played a role on Silicon Valley, but he is perhaps best known for writing and starring in the rom-com, The Big Stick, for which he received several award nominations including an Academy Award. Landing a role in the Marvel movie The Eternals, led to his hitting the gym go get in superhero shape. He is married to comedy producer and writer Emily Gordon. Nanjiani has millions of followers on social media and was named one of Time magazine’s 100 Most Influential People in 2018. He is a ‘fake’ 5’ 10” — in other words, he’s 5 feet 8 inches tall. Nanjiani weighs about 170 lbs. and reduced his body fat from 20% to about 10%.

Naturally more of a nerdy figure, Nanjiani came to the conclusion that he would be able to play a wider range of characters if he had a better physique, and so he set about getting in shape. With the help of a nutritionist, he put on 20 lbs. of muscle through a combination of a high-protein, low-carb diet and exercise. His weekday meals consisted of things like lean animal protein and veggies, but on the weekends he would cut loose with traditional Pakistani food which he loves, but says is super carb-y. It took a year, but it worked and Nanjiani is very proud of the results.

Nanjiani eats low-carb during the week and cuts loose on the weekends. But, there’s payback. Eating all those carbs makes him very sleepy.

Nanjiana’s meals were carefully calibrated, and every macro was counted, but he was fully committed to the plan. He said his nutritionist had to force him to take cheat days.

Nanjiani on his Low-carb Diet

‘Basically, it’s 5 days of low-carb, then over the weekend you can eat as much as you want.’

Nanjiani on his evolving diet

‘I’m trying to figure out the food thing right now because I wasn’t eating enough.’

‘I’m still kind of afraid of gaining the wrong kind of weight, because I’m very vain.’

‘Pakistani food is delicious, but it’s a lot of carbs…Afterward, my wife will say, “Let’s take a quick nap.” We wake up 5 hours later.’

‘I love, love, love street-cart food. Gyros are like a meat-flavored fruit roll-up.’

That is to say, go about it scientifically. Nanjiani trains at Granite Gym in Beverly Hills with former Mr. Canada, Grant Roberts. The place is known for being ‘paparazzi-proof.’

Nanjiani uses electrical stimulation (e-stim) as part of his routine to fire up certain muscles and speed up results.

Nanjiani does a bunch of exercises that target the shoulders, chest and arms, but the only equipment he needs is dumbbells and a bench.

Nanjiani is the first to admit he couldn’t have done it alone, and credits his team of professionals for helping him achieve his goals.

Commit to the Sweat

To get ripped, Nanjiani works out 5 days a week, each session lasting about an hour. Nanjiani is totally committed to the program, doesn’t complain, and asks lots of questions because he wants to understand it all and get it right.

Nanjiani does a typical split routine, focusing on one body part at a time, such as legs one day and chest the next.

For maximum gains, Nanjiani’s trainer makes a point to tweak the reps to work the muscles in different ways.

Do the following exercises as a tri-set, using the same dumbbells. Do 5-8 reps x 3 sets, taking 60 seconds’ rest between sets.

W press: sit on a bench, dumbbells at shoulders. Press dumbbells up and out, stopping when arms are almost straight, then return to starting position. Do 12-15 reps x 3 sets.

Nanjiani on his Physique

‘I realize what’s holding me back from those roles is how I look, so I’m changing that.’

‘When I’m exercising, I’m not thinking about anything else. It’s like meditation.’

‘Effort isn’t funny. Several of my friends have said, “There’s nothing funny about a guy who works out all the time.”’

Nanjiani on being Ripped

‘If I can be a big, buff person with the same outlook I have now, that would be pretty cool. There aren’t many people around like that.’

Nanjiani has appeared on Disgustingly Healthy and communicated his (low) opinion of various health foods, but jokes aside, he doesn’t have much to say about the supplements he might take. While he benefited from working with a nutritionist, if you’re starting a new diet, a multivitamin is never a bad idea to cover your nutritional bases.

Omega-3 fatty acids are important for fat-burning, and also to reduce inflammation from hard workouts.

To build muscle and burn fat, protein powder is a good choice.

vitamins A, C, and E

Antioxidants like vitamins A, C, and E neutralize free radicals that get produced during intensive workouts (and from the environment etc.).

To stay connected, Nanjiani and his wife say they made a pact to always go to bed at the same time, even if their schedules are totally opposite.

Nanjiani met his future wife Emily Gordon when she heckled him at a stand-up comedy routine. After the set, Nanjiani introduced himself. Then, to impress her, wrote her name in Urdu.

Two of Nanjiani’s comedic idols are Bill Murray and Hugh Grant. He also hosted a podcast reminiscing about The X-Files, and wishes he could be best friends with the character Fox Mulder.

It (Sort of) Runs In the Family

Nanjiani is from a family of doctors, and they all expected him to become one, including Nanjiani himself. He has a second cousin named Shereen Nanjiani who is a radio presenter in Scotland.

Nanjiani on his Beard

‘I grew a beard because I needed a crutch to start working out intensely. But it’s going well, so I’m going to shave it.’

Nanjiani on his idol, Bill Murray

‘He’s the opposite of effort. He’s really not trying at all.’

Nanjiani on Being a Homebody

‘I stay home. It’s the best place to be alone. There is hardly any walk-through traffic.’

Nanjiani on his Brand of Comedy

‘I try to make my comedy really personal. I try to tell stories that happened to me, experiences from my life.’ 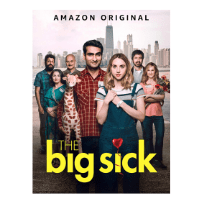 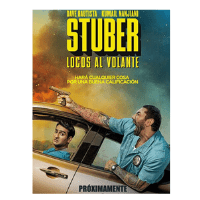 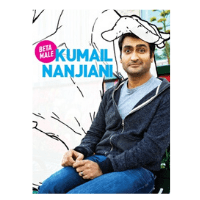 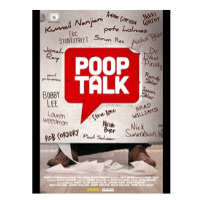 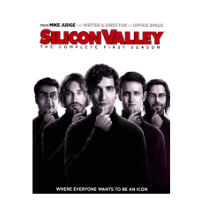