Instant Knockout Cut Review – Is This Supplement Worth The Purchase? 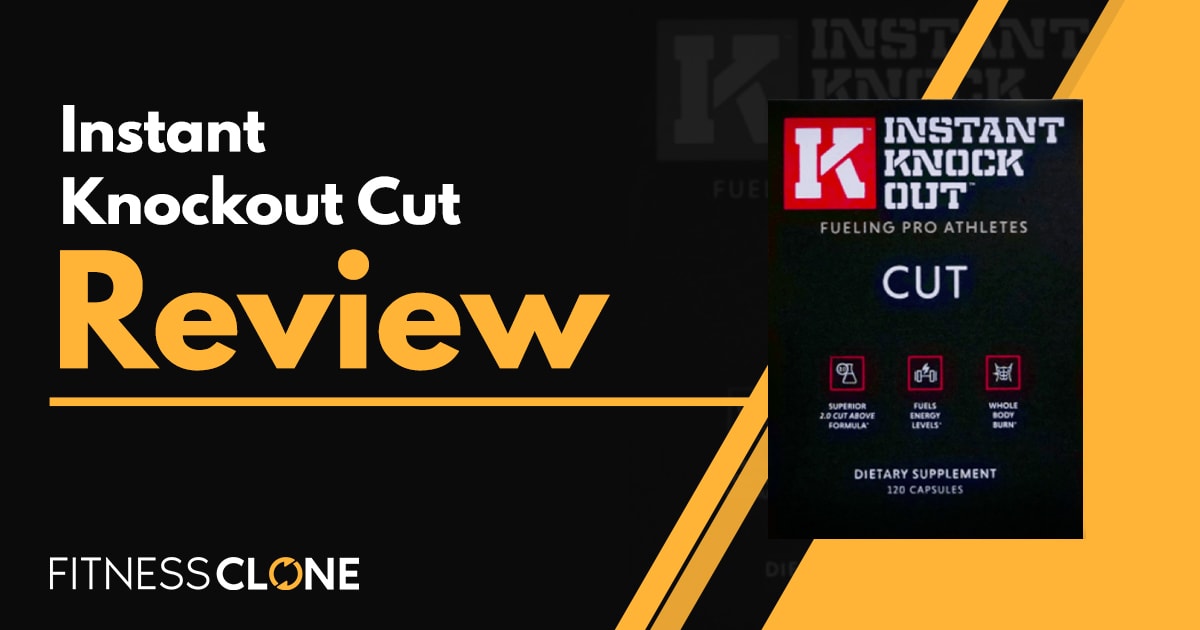 Fat-burners are nearly everywhere you look these days; in grocery stores, wellness stores, online, and in TV ads. There seems to be tens of thousands of these supplements out there. Unfortunately, many of them don’t work very well, and only a handful are actually worth considering.

Among these fat burners, one supplement that claims to be effective is Instant Knockout Cut. Does it have the right ingredients? Does it promote the benefits you’re searching for? Is it really worth the price? In this Instant Knockout Cut review, we’ll answer those questions and more so you can find out if this fat burner is the right one for you.

Instant Knockout Cut is a premier fat burner used originally by MMA fighters and other combat sports athletes. But it’s now available to the public, and the makers claim it’s the most effective fat burner out there.

Instant Knockout Cut is advertised to deliver a wide range of benefits for both athletes and average joes, including:

Instant Knockout Cut contains a very high dose of glucomannan to suppress appetite and reduce cravings, helping you steer clear of calorie-dense foods. Other ingredients also play a role in suppressing appetite, such as cayenne and caffeine.

There are many ingredients in here to also kickstart your metabolism into overdrive and boost thermogenesis to help you shred off fat. Caffeine, green tea extract, black pepper extract, and cayenne are all involved here.

Instant Knockout Cut also has ingredients designed to support your energy levels and mood, such as theanine, B-complex vitamins, and caffeine, so you can have better, longer-lasting workouts and also enjoy the fat loss process more easily.

And, of course, all of these factors combined are designed to help melt the fat off of your body, so you can enjoy a leaner, harder, and healthier look. But will Instant Knockout Cut really help shred off the pounds, or is it just another run-of-the-mill fat loss supplement that doesn’t work? Read on to find out.

Instant Knockout Cut comes in capsule form, and the recommended dosage is 1 capsule four times per day. Below is the ingredient label for four capsules serving:

Up first is glucomannan, which is a dietary fiber found in the root of the konjac plant. When combined with water in the intestines, it forms a bulky fiber that can help suppress appetite, as well as slow the absorption of sugar and cholesterol. Recent reviews show that glucomannan supplementation is effective for decreasing weight and body fat in overweight and obese people.

At least 1 gram is best, sometimes up to 4 grams or more.

Instant Knockout Cut also has the infamous caffeine, in a pretty high dose, for that matter. Caffeine is a very strong CNS stimulant and can also result in increased energy expenditure, fat oxidation, and thermogenesis. Plus, caffeine can increase mood and alertness through its actions on dopamine, norepinephrine, and other neurotransmitters.

Plus, it can improve exercise performance, too, such as endurance, power, and strength in some cases. Overall, research shows caffeine is effective for reducing body weight, body fat, and BMI. If you are sensitive to this ingredient, though, there are fat burners out there, like Kaged Muscle Clean Burn, that do not include caffeine.

L-theanine could be considered caffeine’s partner in crime since it has a balancing effect on caffeine by promoting feelings of calmness and focus. It increases alpha waves in the brain, as well as serotonin, GABA, and dopamine, all for a mood boost and feelings of relaxation. And research shows combining caffeine with theanine leads to improvements in alertness, attention, and overall cognitive function.

Most research uses 200mg per day.

Up next is cayenne powder, which comes from the cayenne pepper fruit. Cayenne is rich in capsaicinoids, which research shows can increase thermogenesis and metabolism, thus stimulating fat oxidation.

Not only that, cayenne can improve insulin sensitivity, reduce blood glucose and cholesterol, decrease blood pressure, and reduce oxidative stress and inflammation, all of which play a role in weight loss and health. Overall, cayenne seems to be moderately effective for weight and fat loss.

Black pepper extract is known to increase the bioavailability of many ingredients, so it can increase the effectiveness of the ingredients in here. Plus, black pepper has its own benefits of increasing thermogenesis and enhancing digestion.

Vitamin B6 and Vitamin B12

Instant Knockout Cut also has vitamin B6 and vitamin B12, which are two B-complex vitamins. Both of these are involved in energy metabolism, neurotransmitter synthesis, and other aspects of brain health, so they are important for mood and energy levels. The roles of B6 and B12 in fat metabolism also may play a small role in fat loss.

The final ingredient is vitamin D3, which acts as a prohormone. Vitamin D is important for bone and muscle health, hormonal maintenance, immune health, and even brain function. Research also shows that low vitamin D levels are associated with higher fat mass, although supplementation doesn’t seem to be very beneficial for weight loss.

Overall, Instant Knockout Cut should be a pretty effective fat loss supplement. It has all well-researched ingredients, such as caffeine, glucomannan, green tea extract, and cayenne, and they are all at optimal dosages, with the exception of theanine.

Instant Knockout Cut should work, but it’s important to be realistic of your expectations. This supplement won’t magically melt the pounds off your body, but it should help you lose a few extra pounds over what you would lose with diet and exercise alone.

And it should also give you a mild to moderate boost in energy, mood, and performance, which could help you lose more fat and enjoy the process a bit more along the way.

Who is Instant Knockout Cut Best For?

Originally designed for high-level combat athletes, Instant Knockout Cut is best for any athlete who wants to lose fat and get into top-level shape more quickly than through traditional exercise and diet alone.

It can also be for the everyday Joe who just wants to lose a few more pounds and look better, but keep in mind that you still have to have a healthy diet and exercise, no matter who you are. 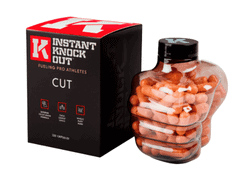 Instant Knockout Cut only has naturally sourced ingredients, but there are possible side effects, such as:

Instant Knockout Cut is made from 100% legal and naturally sourced ingredients, and it is manufactured to FDA standards at cGMP-registered facilities.

The capsules are also vegan-friendly.

Where to Buy Instant Knockout Cut

Each bottle of Instant Knockout Cut comes with 30 servings (120 capsules). You can choose to buy a 1, 2, or 4 months supply. Below, we will detail the pricing available.

Instant Knockout Cut is a pretty expensive product, with a price per serving ranging from $1.63 to $2.17 per serving. Plus, there’s no traditional money-back guarantee; you can only return unopened products within 30 days of purchase.

Overall Rating: 3.73 out of 5
Categorized in: Fat Burner Reviews, Reviews