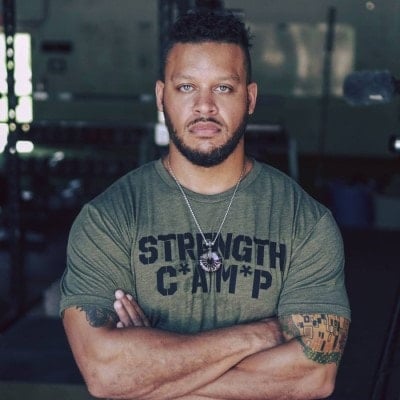 Originally from New York, Elliott ‘The Incredible’ Hulse was inspired by his uncle, a gymnast and martial artist, to become physically fit. He started playing football in middle school and won a scholarship to St. John’s University where he was team captain and earned an MVP title. While still in college, he established his own gym. Due to the economic downturn in 2008, he closed up shop and started a YouTube channel called ‘Strength Camp.’ He became a social media sensation and has about 2 million followers. In 2015, he won the YouTube Fan Favorite award. Hulse won The Strongest Man In Florida in 2009. While recovering from a serious injury, he discovered the importance of spiritual health. He co-wrote a book called KING which chronicles his life’s experiences. He once again has a gym where he runs strength camps. Hulse lives in Florida with his wife and 4 children. He is 5 feet, 9 inches tall and weighs about 210 lbs.

When Hulse was training as a strongman, he says he would literally eat anything so long as it helped him bulk up. After his bodybuilding career ended, he tried different diets for about 5 years, and while his muscles may have looked okay, his performance level wasn’t great. He then discovered the idea of eating based on your biochemical type, which is that each person has a unique body chemistry, and that for optimum health you should find the diet that suits your metabolism. For him this involves a lot of grass-fed meat and eggs, and organic vegetables. He does not eat anything that is processed. He also makes sure to drink plenty of water, and also uses sea salts to stay hydrated.

A friend first introduced Hulse to the concept of organic foods back in the early 2000s. He read the book Empty Harvest and became dedicated to the practice of eating exclusively organic food.

There are 3 general types of metabolic systems: Fast Oxidizer that does best on a high-fat, animal protein diet; Slow Oxidizer which does best on a mostly plant-based, higher-carb diet; and Mixed, which falls in between.

Not Written In Stone

Hulse says the hard thing about metabolic typing is that it isn’t the kind of thing you set up and forget about it. Your body has different requirements based on stress, sleep, seasons, exercise, and can even act differently based on the moon. For optimum performance, you must pay attention to what your body is telling you every day.

Hulse learned that by rotating the foods he was eating, he could quickly identify which ones were working and which ones were making him sleepy, scattered, or depressed.

‘I have chosen to put my personal health, vitality and long-term well-being above practically everything else in my life.’

‘Dieting is perhaps one of the most confusing topics in fitness. It seems that there are as many divergent experts, philosophies and opinions on dieting as there are stars in the sky.’

Hulse on Finding THE One Diet

‘If you gave 100 people the same exact fat-loss diet, and they followed it religiously, not all 100 people will get the same result.’

‘Our biochemistry is as unique as our fingerprints.’

At his strength camps, Hulse teaches corrective stretching and exercise, and of course helps clients get as strong as they can.

In addition to coaching strongmen (and women), Hulse runs Grounding Camps that offer courses in bioenergetics, active mediation and philosophy.

Hulse is a fan of upper cervical chiropractic because the first vertebra floats, making it easy to get out of alignment. This in turn can distort the information being sent out to the rest of the body.

Hulse says you can check your alignment by marching in place in front of a wall, eyes shut, for a minute. If you have turned, you know you are out of whack.

Start With the Basics

Hulse believes basic exercises like push-ups and pull-ups will always have their place in any routine, and he encourages clients to do as many as possible in every session as a warm-up before lifting weights.

Hulse says a lot of people have muscular imbalances due to bad habits and training. Things like bodyweight and kettlebell exercises can help fix those misalignments, and become stronger.

Hulse’s advice to beginners is to take things slow. He says you will almost certainly injure yourself if you don’t. He also encourages beginners and everyone to listen to their body and take a break from the gym every now and again.

Hulse on the Evolution of his Training

‘A lot of these changes are not changes at all. What has always been there is to take a holistic approach to performance.’

Hulse on Becoming your Strongest Self

‘The first place we begin is with the nervous system and how well it’s functioning.’

Hulse on Treating the Body as a Whole

‘I use the analogy of a race car. If you have a wheel misalignment, I don’t care how well you drive. It’ll never perform at its best.’

‘There’s more to getting strong than lifting heavy weights.’

Hulse eats fatty fish regularly and he also supplements with fish oil. Fish oil is high in omega-3s that help reduce inflammation in the body, and promote brain and heart health. 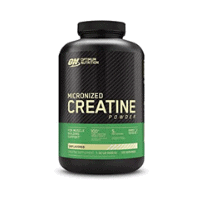 Hulse says he’s not big on supplements, but he takes creatine because he notices it really helps improve strength and muscle gains. 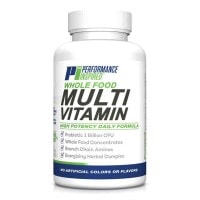 Another basic for Hulse is a multivitamin, simply because it hits the nutritional basics. 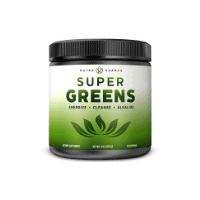 Even though he eats his veggies, Hulse sometimes goes for a green supplement, which provides antioxidants and phytonutrients we all need.

Hulse does his best to go to bed early. He’s sometimes asleep by 9:30. He is up early too: 5:30 for active meditation.

Hulse says everything that happens in your life impacts your strength. He helps clients work through mental and emotional issues, gain insights and get even stronger.

Hulse is famous for physical fitness, but due to his experiences with depression, he prefers to work on more general self-improvement. He took a course on Osho active meditation and says it changed his life. He meditates every morning.

Hulse also took a type of therapy called pulsation, which uses energy to free emotions that had been trapped due to poor breathing technique.

‘While most meditations are sit down and breathe — which is great, that’s what you’re aiming for — his required that you got up and that you change the body with breath through various different exercises…I was drawn to it as an athlete.’

‘I resist labels but it’s hard for people to know who you are and what you’re doing if you don’t label yourself…I’m a coach. I’m a healer. And I support people in becoming the strongest version of themselves…I’m a holistic strength coach.’

Hulse on Becoming his Best Self

‘I am not afraid to take action where my heart leads me.’

‘I love hearing their problems and giving creative solutions to it.’ 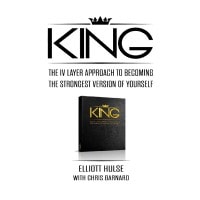 King: The IV Layer Approach to Becoming the Strongest Version of Yourself 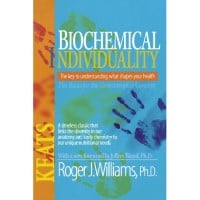 Biochemical Individuality
GET IT HERE 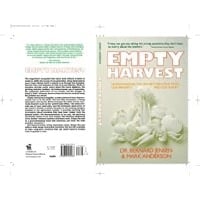 Empty Harvest
GET IT HERE 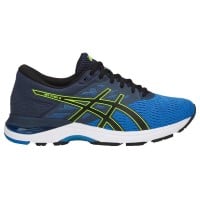 Asics
GET IT HERE 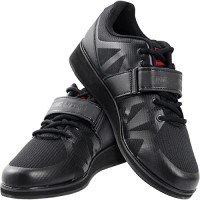 Weightlifting shoes
GET IT HERE 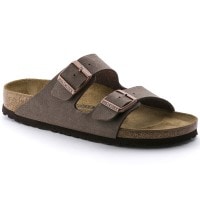 Birkenstocks
GET IT HERE