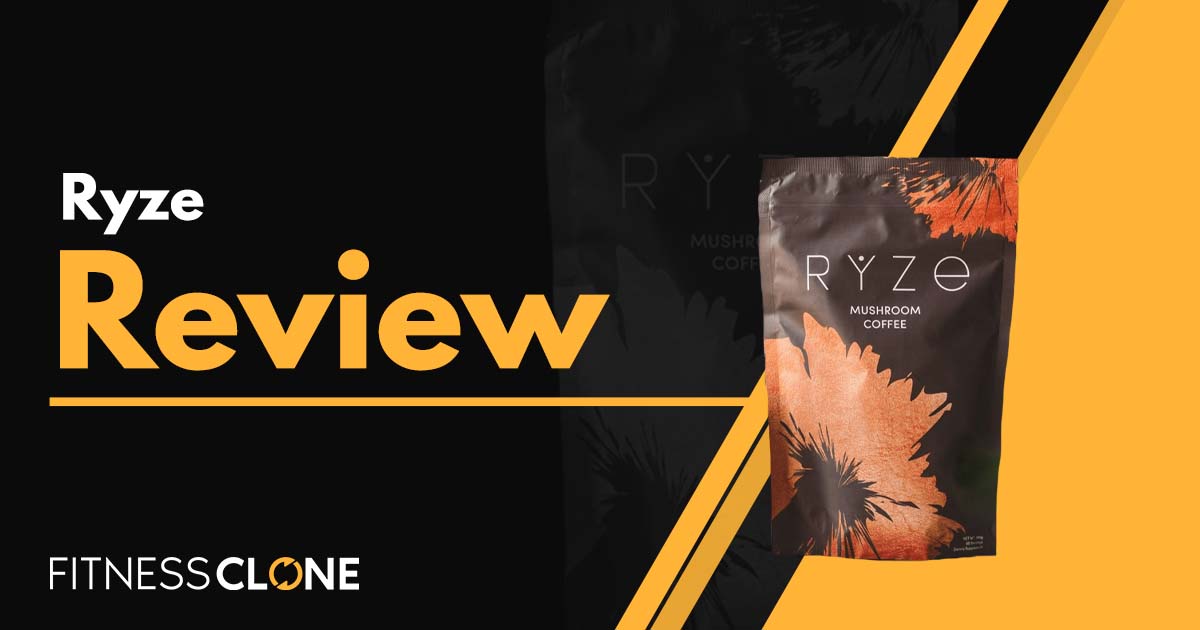 Ryze is a coffee alternative that includes a blend of adaptogenic mushrooms and Arabica coffee designed to provide a plethora of health benefits.

Nearly two-thirds of Americans wake up to a morning coffee (or five) daily. For some, this ritual isn’t going anywhere anytime soon. Yet others may be looking for alternatives to their morning joe for various reasons.

One main reason some may be looking to switch is to avert the adverse side effects of chronic caffeine consumption and to simply become healthier. And if you look around, you’ll notice that there are more and more coffee alternatives being produced, such as Ryze Mushroom Coffee.

In this Ryze review, we’ll give you a more thorough look at this product so you can find out if it’s truly a worthy alternative to your daily cup of coffee. We’ll look at its ingredients, including the various mushroom species in it, its side effects, taste, and more.

So, without anything further, let’s get started with this Ryze review and find out what this product has to offer!

Ryze Review: At a Glance

Ryze Mushroom Coffee (also referred to as Ryze) is a coffee alternative product created by Ryze. It includes a blend of six different adaptogenic mushrooms advertised to deliver a wide array of health benefits. And yes, coffee is still in this product, but they say the caffeine content is much lower than the regular cup.

Essentially, Ryze is designed to deliver steady-state energy throughout the day without the crash and boost your overall health in the process.

Ryze Mushroom Coffee is advertised to deliver a myriad of benefits that include the following:

These benefits are all primarily attributed to the six different mushrooms included in the formula. Organic coffee is also included and designed to promote clean energy without the crash. So, the combination of moderate caffeine and mushroom blend is supposed to deliver a comprehensive array of health benefits.

But how well will Ryze Mushroom Coffee actually work? Read on to find out!

Below are the specific ingredients, with the amounts based on the serving size of one tablespoon:

The main ingredient in Ryze is the RYZE Organic Mushroom blend, which consists of cordyceps, reishi, king trumpet, lion’s mane, and turkey tail mushrooms. All these mushrooms have unique benefits, with some offering multiple benefits.

Mushroom products have become widely popular, as exhibited by Four Sigmatic’s extensive line, and for a good reason. In general, mushrooms offer digestive health benefits due to the prebiotics in them, and most mushrooms also have antiviral, antibacterial, immune-modulating, and anti-inflammatory effects.

Below are the main effects that each of the mushrooms found in Ryze’s formula can provide.

Cordyceps has been used in Asia for thousands of years due to its benefits, and it’s sometimes referred to as the “Himalayan gold.” Current research shows that various compounds, such as cordycepin, can lead to health benefits.

These include antimicrobial, anticancer, antiviral, anti-inflammatory, antioxidant, hypocholesterolemic, and organ-protective functions. Moreover, cordyceps have been shown in some research to reduce fatigue and increase energy.

Another mushroom with a wide range of benefits is reishi. The benefits come from various compounds in it, such as ganoderic acids, sterols, and more.

As it stands today, reishi appears to be effective in reducing anxiety, depression, and stress. It also helps with diabetes, cardiac diseases, inflammation, epilepsy, liver diseases, and immune problems. Yet, continued research is necessary to make these claims definitive.

Like most other mushrooms, king trumpet has many different compounds noted for its health benefits. Primarily, research on king trumpet shows it is a powerful antioxidant and anti-inflammatory. It also may help boost the immune system, reduce cholesterol, and reduce tumor formation.

Next is shiitake, a mushroom that is probably more well-known than some of these other ones. Shiitake mushroom is most notable for supporting the immune system and helping the body against various infections.

Moving on, this blend also includes the majestically-named lion’s mane mushroom. A unique benefit of Lion’s Mane is that it is neuroprotective and can benefit many aspects of mental health. Specifically, Lion’s Mane has been used effectively to reduce fatigue, depression, and anxiety, and it has also been shown to improve various aspects of cognitive function.

Like most mushrooms, it also can support the immune system, reduce inflammation, and act as an antioxidant. It also shows protective effects in diabetes, hypertension, high cholesterol, cancer, and other diseases and disorders.

The final mushroom in this blend is turkey tail (and if you look at an image, you can see how well the name really fits). Some of the main benefits of turkey tail are immune support, antiviral and antimicrobial action, and reduced cholesterol.

Ryze Mushroom Coffee also contains a small amount of organic coffee, which brings forth around 48mg of caffeine. Coffee is one of the most widely consumed substances in the world, and research shows that it has some beneficial compounds, such as polyphenols.

Moderate coffee consumption may help reduce inflammation and oxidative stress and is also associated with a decreased risk of cancer and all-cause mortality. There are alternatives with no coffee in their formulas, such as MUD\WTR, but it’s not an unusual ingredient and can provide some benefits.

The final ingredient in Ryze is organic MCT oil. MCT stands for medium-chain triglycerides. MCT can increase feelings of fullness and reduce food intake so that consumption may help with weight loss and related outcomes.

Overall, Ryze Mushroom Coffee is likely to be a solid alternative to traditional coffee. All of the mushrooms in Ryze are proven to offer various health benefits. Plus, adding in a small amount of coffee should lead to even more remarkable effects since coffee does have advantages in its own right, just not when used in excess.

The primary concern is that all of the ingredients are part of a blend, so it is impossible to tell precisely how much of each mushroom is included. While this limits its potential effectiveness, the fact that all of these mushrooms deliver so many health benefits still makes it likely to be a quality supplement.

Recall that there was a laundry list of advertised benefits for Ryze Mushroom Coffee. And based on the research, all of the benefits should happen, at least to some extent.

All six mushrooms have many different health benefits, so you will likely receive an overall health boost from drinking Ryze. And it should provide you with steady energy not just from the coffee but, more importantly, the mushrooms, especially cordyceps and lion’s mane.

How Does Ryze Coffee Taste?

Ryze has been described as having an “earthy” flavor and taste.

Who is Ryze Best For?

Ryze Mushroom Coffee should be a great product for health-conscious individuals who want an excellent overall energy and health boost without excessive stimulants and other harsh ingredients.

All of the ingredients in Ryze are clean, natural, and healthy, so this is an excellent product for people looking for a healthier, less stimulatory alternative to coffee. Also, if you find yourself addicted to coffee or would like to limit your consumption, this product may be worth trying.

The moderate caffeine content could still cause some unwanted side effects in caffeine-sensitive individuals, such as anxiety, nervousness, insomnia, jitters, etc. But this is unlikely, especially with just one serving.

Otherwise, some side effects related to the mushrooms may include:

Also, all of the mushrooms are sustainably grown in California. Every ingredient in Ryze Mushroom Coffee is organic and rigorously lab tested for mycotoxins and heavy metals to ensure overall safety. Lastly, it is free from sweeteners and additives.

Does Ryze Coffee Make You Trip?

Ryze coffee will not make you trip as it does not contain psychedelic mushrooms.

Where to Buy Ryze

You can buy Ryze Mushroom Coffee directly from the official Ryze website here.

Each package of Ryze contains 30 servings (30 tablespoons). There are three size options available for purchase with additional savings for purchasing larger quantities. We will detail the pricing of Ryze further below. 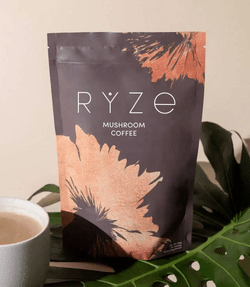 Save up to 17% on RyzeWe scour the web for the best deals on supplements. Want to get up to 17% off your order of Ryze? Click the button below to get this deal!GET THE DEAL

Alternatively, you can choose the Monthly Auto-Ship option for one package, which saves you 16.67% and costs $30.

So, depending on your choice, you’ll be paying anywhere from one dollar to a buck twenty per serving of Ryze. Overall, Ryze’s price is definitely in the affordable range for most.

Shred Her Review – Is This Natural Fat Burner Worth Buying?

Leptitox Review – Is This Weight Loss Supplement Worth The Purchase?

Tailwind Endurance Fuel Review – Can This Supplement Help Your Training?

Organifi Red Juice Review – Should You Use This Superfood Powder?

JYM Shred Review – Can It Solve Your Weight Loss Woes?