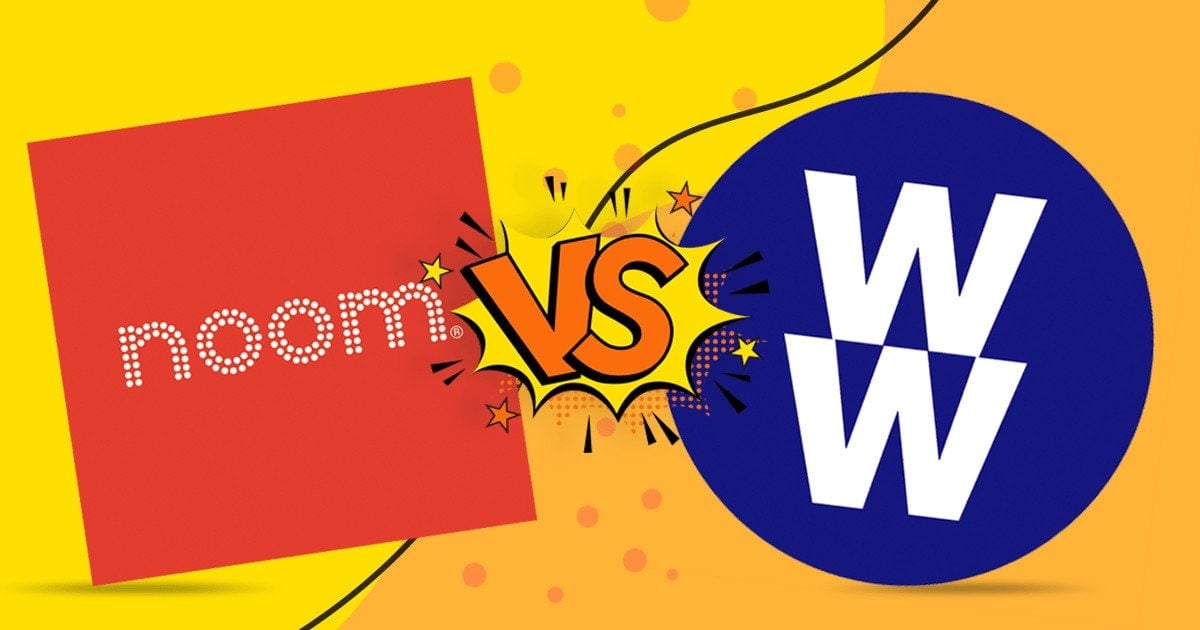 Your weight loss goals mean a lot to you, but that doesn’t mean they come easy. In fact, they’re often easier said than done, which is why so many people either give up on them or never begin in the first place. It’s a harsh reality that plagues millions of individuals every single year.

The truth is losing weight and burning fat requires a lot of hard work. It’s not going to happen out of thin air — you must follow the right diet, exercise regularly, and make other lifestyle changes in order to see the results you desire. It’s possible, but only if you’re willing to put in the work.

The good news is there are a ton of things you can do — and a wide range of resources — that are designed to help you reach those goals of yours. For example, Noom and Weight Watchers are two extremely popular programs that have helped people lose weight and maintain results.

Noom vs. Weight Watchers: About the Programs

Weight loss programs are all the rage today as many people look to get a grip on their nutritional and diet needs. While these programs won’t do the work for you, they do give you the guidance, direction, and knowledge needed when reaching your target weight and maintaining it long-term.

Both Noom and Weight Watchers are trusted and reliable programs for anyone looking to lose weight and keep it off. If you’re looking to learn more about these two programs, then you’ve come to the right place. We’re going to teach you everything there is to know about each one.

As you continue reading, you’ll learn about each program’s features, what’s similar, what’s different, the benefits, how well they’re perceived by users, their value, and other considerations that might be important when trying to decide which one is best for you — so let’s get started!

Noom was founded in 2008 by Saeju Jeong and Artem Petakov. They were unimpressed by how the healthcare system addressed behavioral and preventable causes of death. They decided to build digital products — like Noom — to help others retake control of their health.

With Noom, they utilize psychology, technology, and human coaching to help people lose weight and lead a healthier life. It not only helps you build better habits, but allows you the opportunity to learn more about what you eat, why you eat it, and how you can change your diet for the better.

Although no food is off-limits when monitoring your weight loss goals through Noom, they do break down food into three categories — Green, Yellow, and Red foods. They encourage you to eat a little of everything, but with a focus on Green foods — eating Yellow and Red in moderation.

What is Weight Watchers?

Weight Watchers, now formally known as WW, was founded by Jean Nidetch in early-1960. It has been a trusted weight loss program for over 60 years. Nidetch began by inviting friends over to her home to discuss how they could better lose weight. It all started in her home in Queens.

Today, Weight Watchers helps people through a digital platform and app — reaching millions of people on a daily basis. It utilizes the latest in behavioral and nutritional change science to ensure users are met with realistic and practical ways to reach their weight loss goals.

Instead of using color-coded foods like Noom, Weight Watchers utilizes a points system where each food is given a point value. Again, no food is off-limits, but you must remain in your daily points budget. They also offer a rewards system for good behavior — called WellnessWins™.

Noom and Weight Watchers are both designed to do the same thing — help people lose weight with behavioral and nutritional changes. With that said, they both do so in completely unique ways. While WW uses a points system, Noom uses a color-coded system for the food you eat.

You can think of Noom as the new kid on the block and Weight Watchers as the old man that’s been around the block a few times — they both come with unique benefits, but one might be better than the other for certain people. Don’t worry; we’ll help you determine which program is best for you.

Noom and Weight Watchers are two of the most popular weight loss programs for a reason — they work when utilized properly. That doesn’t mean you won’t have to put in effort, and you’ll have to stay dedicated to their guidance, but losing weight has never been more possible.

When trying to decide which one is right for you, you’ll want to take a look at the similarities and differences between the two for a better understanding of what they offer. The good news is we’re going to break those down for you below in an easy-to-read list. Let’s take a look!

Noom and Weight Watchers come with a wide range of benefits for users interested in losing weight and maintaining their target weight long-term — otherwise, they wouldn’t be as popular as they are today. They’ll give you that boost you need when making a positive change in your life.

Both Noom and Weight Watchers have helped millions of people reach their target weight and maintain their weight long-term. That means there’s a heavy sample size for each program, which gives you a ton of reviews, feedback, testimonials, and ratings to consider for each.

These user reviews are extremely important because they give you a first-hand look at other people’s experiences with the program. It’ll give you a firm idea of what to expect when you join and let you know whether or not it’s a good investment for you. They shouldn’t be overlooked!

Most of the people that rated it below three stars had complaints about the app itself, not so much the service. As you can imagine, this is common with most apps as some people wish it were easier to use, navigate, have less bugs, or work differently.

Only about 25,000 people of those 1.6 million reviews on the App Store rated the app three stars or under — which is why their rating is so high for Apple users. Some people have reported issues using the app and tracking services, but those numbers are small compared to the rest.

Noom vs. Weight Watchers: Other Considerations

We’ve gone over a lot about Noom and Weight Watchers up to this point. We’ve discussed a little background about each program, the features, the similarities, differences, benefits, and user reviews. By now, you should have a firm idea of which one speaks to you the most.

With that said, it’s perfectly normal for some people to still be on the fence about which one is best for them. If this sounds like you, don’t panic — you’re not alone. We’re going to detail some of the nitty-gritty details about Noom and Weight Watchers that we haven’t discussed yet.

Of all the things we’ve mentioned about Noom and Weight Watchers, one thing we haven’t discussed was the value of each. As you can likely imagine, the cost of each program is going to play a major role in your decision. Without further ado, let’s take a look at what the costs are.

Noom also offers add-ons, such as meal plans and workout plans for those that need a little extra guidance and direction.

Noom vs. Weight Watchers: Which Weight Loss App Is Better?

Noom and Weight Watchers are two of the most effective weight loss programs in existence today. They boast similar benefits, but achieve results in different ways. At the end of the day, you can’t go wrong with either one. It largely boils down to preference when using the apps.

For those that want to learn more about the psychology behind their eating and fitness habits, Noom is the clear choice. It’ll help teach you the right habits, that way you can eventually find success with your weight without the use of the app.

For those that need more guidance and direction, Weight Watchers is the better choice and has a more aesthetically pleasing app. Many users will likely gain their weight back once they stop using the service, especially since you won’t be able to count points — opposed to counting calories.

Still want to learn more about both options? Check out our complete review of Noom here and our guide to the Weight Watchers diet here for closer looks at both of these diets.

Amazing Grass Vs. Athletic Greens – Which Greens Powder Is Better?

GutMD Vs. Total Restore – Which Digestive Supplement Is Best?

Athletic Greens Vs. Organifi – Which Greens Powder Is Better?